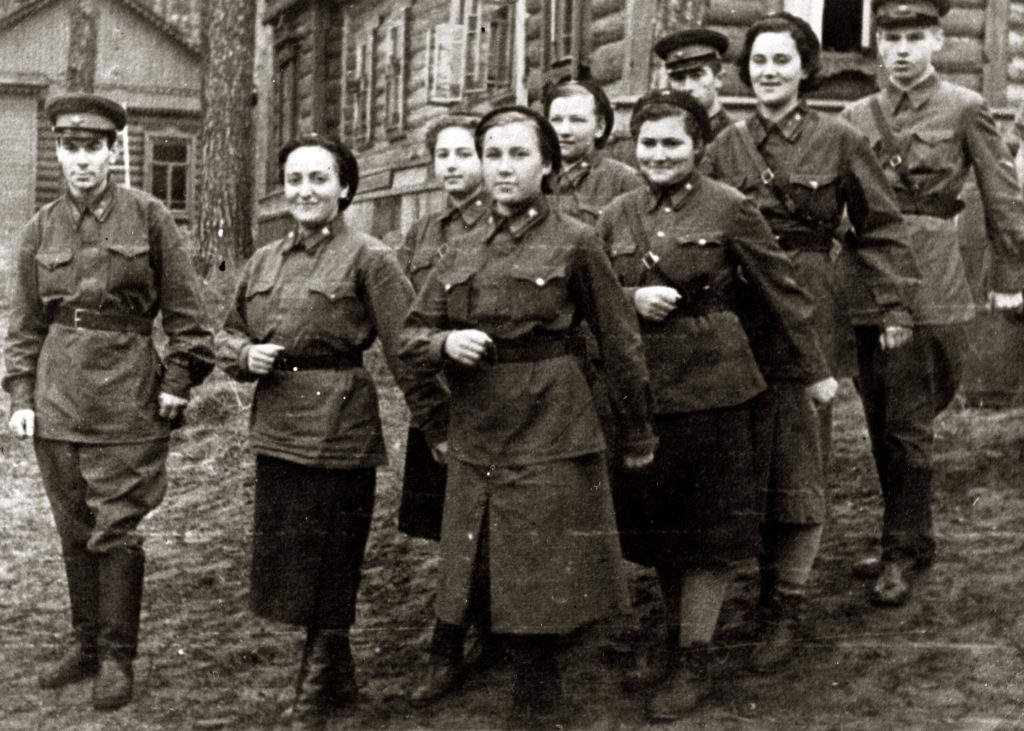 This is the group of the students of the Institute of Military Translators. This is I Marina Yanova in the closest row, the 2nd to the right. The picture was taken in Stavropol in 1942 before going to the lines. The barrack is in the background, my friend, Marina Saifulis, is in the front. I was very happy when I heard the announcement at the institute asking if there were any volunteers to go to the front as military translators and that they should go to the rector. My German was very good, but I didn’t know the military terms very well and I understood that I was supposed to learn that. I went to the rector for enrollment. There was a military board in his office. Translators were referred to the intelligence department. That is why the selection process was carried out by the militaries. They interviewed me, put my data down. Then I was informed that I was included in the group for studies at the Military Institute of Foreign Languages. In the pre-war period it was a faculty of the Institute of Foreign Languages and with the outbreak of war, that faculty acquired the status of a separate institute of military translators to be sent to the front. I was very frustrated that I had to go on with my studies. I thought that the war would be finished while I was studying. I was consoled that the war wouldn’t end so soon, and besides only literate translators were required at war. The institute worked in the city of Stavropol located at the Volga, 1,300 kilometers north-east of Moscow. It was a godforsaken town, a big village in fact. We were starving. Almost the entire group consisted of girls as the boys were drafted into the lines. There were several boys in our group, who couldn’t be drafted because of their physical state. Hungry and cold girls were made to go to the forest everyday to get firewood for the teachers. One of the groups was to hew the trees, while the other was to chop it. Of course, we weren’t experienced in that. We had to saw the trunk of a large pine more than to the half and then push it. When a gigantic pine was about to fall, all of us scattered like mice in different directions. It was the first time I saw death. One of our colleagues didn’t manage to run away and he was hit by the branch of the falling pine. He passed away immediately. It was horrible and fearsome. There were times when I regretted not having been evacuated with my sister and mother.