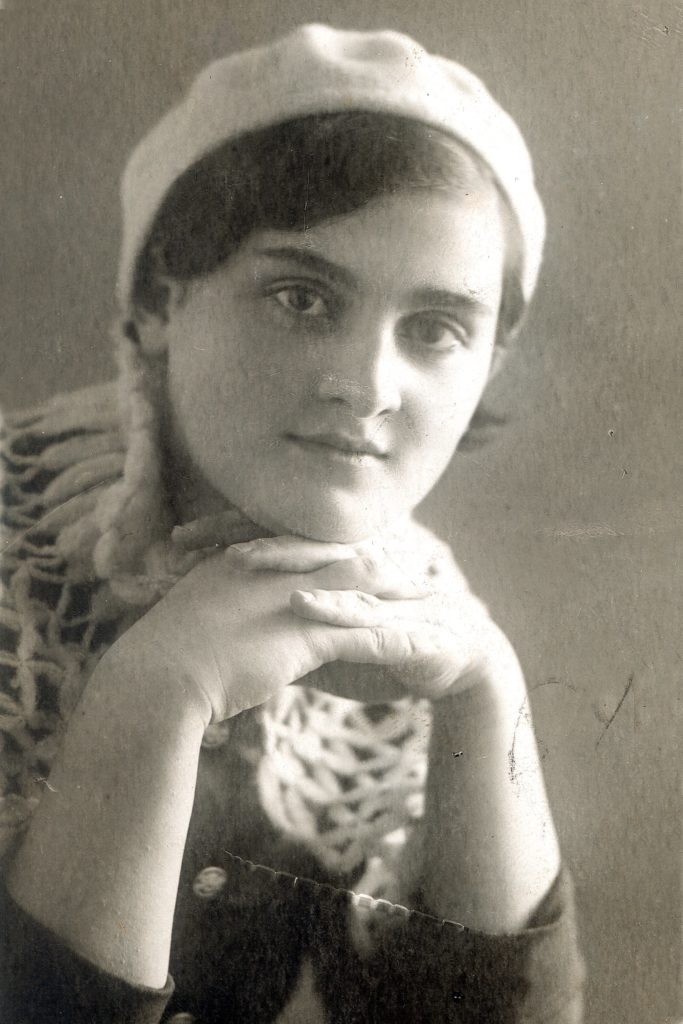 This photograph was taken in Minsk in 1940, when I was a schoolgirl. In 1941 (right before the war burst out) I finished 9 classes.

In our family there were 3 children: elder brother Hirsh was named in honor of my paternal grandfather.

I attended kindergarten, later I became a pupil of the school no.34. After a while we were moved to the Stalin school no.21. My elder brother Hirsh studied at school and had a hobby: he liked to dance and was rarely at home.

At school we had very good teachers. They taught us in some sort of a mixed language: one word in Russian, another word in Belarussian.

Teacher of geography was Uzbek, and Russian language was taught by a Georgian woman. History was taught by a married couple of Rubinchiks: sometimes he taught, sometimes she did. Their lectures were very interesting.

Yakov Meltserzon was our from-master and taught us physics very well. All pupils knew physics perfectly: it was impossible not to know it. If it was necessary, Meltserzon gave supportive lessons to pupils who were below their schoolfellows in class.

When after the end if the war I arrived in Leningrad, I had to pass only 2 examinations to enter a stomatological school (I was hors concours as a war participant):

Russian language and physics. In spite of 4 years of war, I went through the exams successfully (having only 1 month for preparation). I think it happened due to Meltserzon’s contribution.

Recently I read biography of the latter Nobel prize winner (Vitaly Ginzburg, a physicist), where he wrote that before the war he was a pupil of a Minsk school, and it was Meltserzon who planted his love for physics. So I was very proud of the fact that I and the Nobel winner were taught physics by the same teacher.

My brothers and I studied at school. Before the war I finished the 9th from. I remember that when I was a pupil of the 3rd form, I concerned myself with children’s technical station, where we tried to cultivate cotton.

My cotton grew high, but did not ripen: there was not enough solar heat for it. My cotton was shown at the exhibition in the House of Government.

We lived near the river, and I managed to swim well at the age of 12. All children had to meet requirements of special classification standard for young sportsmen [it was called Be Ready to Work and Hold the Line].

A coach saw me at the competition and invited me to his sports group. I agreed. At that time in Minsk there was the only swimming pool in the House of Red Army, I started training sessions in swimming (brace style) at the city sports society.

I held several records of Belarus in that category of swimming; I also took the 6th place at the all-Union competition for girls of my age (aged 12-14).

At the same time I studied in theatrical studio at the Palace of Pioneers. There I got acquainted with Masha Bruskina.

So that was my childhood and it was not a time of stress.