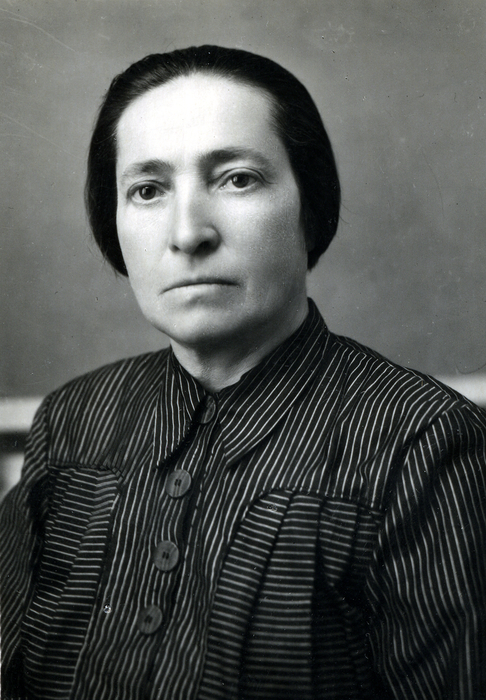 This is my mama Yulia Falevich. I remember that Mama went to a hairdresser’s and had her hair cut.

On her way back she dropped by a photo shop and had this picture taken for the memory. This photo was taken in Slutsk in 1959.

They got married in 1924-1925. Mama didn’t work after getting married, she was very particular about cleanliness. Everything, including the dishes, was shiny..

My father occupied a rather responsible position at the time. He was director of the Slutsk vegetable storage base Belplodoovoshsch and was a member of the bureau of the Slutsk district party committee. The salary he was paid was quite sufficient for the family.

After the war, Mama received notification that my father was missing. We didn’t lose hope that we would find him, but this hope was vanishing in the course of years.

Since I was underage, I received a small pension for my deceased father, which I was to receive till I turned 18. This was all the income the family had.

Life was hard after the war, and this money was far from enough to cover all expenses. Mama couldn’t work. She became very ill after we returned. It goes without saying that the sufferings and everything we had gone through, including hard work at the turf factory, often involving standing knee-deep in water, were the cause for this.

It often happened that Mama couldn’t leave her bed for days in a row. My brother and I had to take care of ourselves and Mama.

After we moved in there, we were overfilled with joy for a long time. I often went to see Mama. I supported her as much as I could. Mama died in 1986.