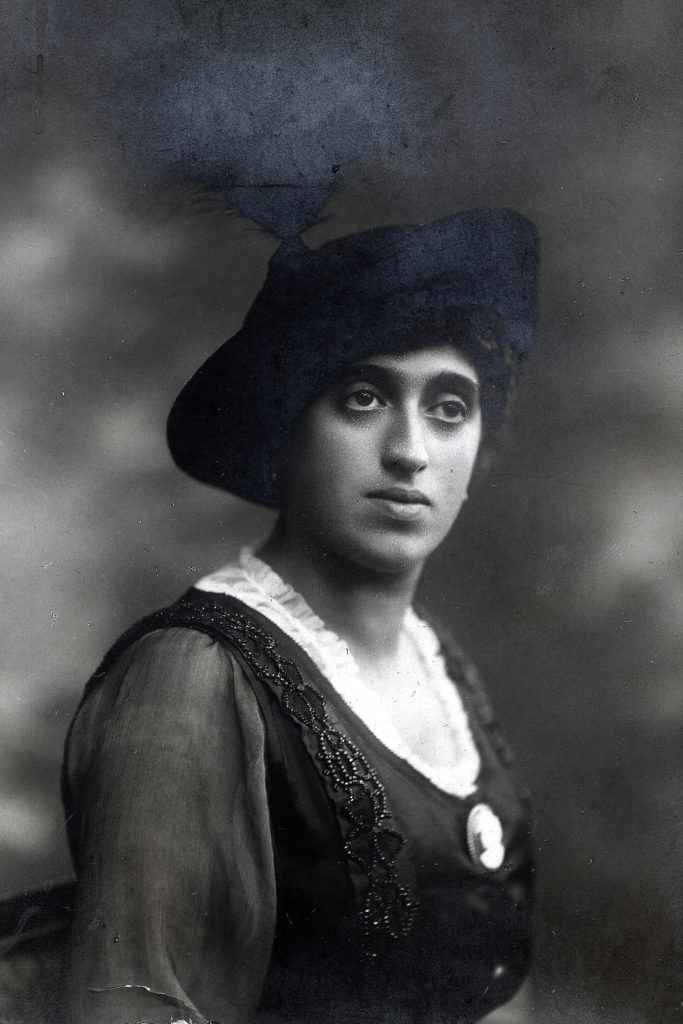 This photograph taken in 1920s shows my mother before her marriage.

My mother Epstein Evgenia Yakovlevna (nee Shemshelevich) was born in 1895 in Revel (now Tallinn, the capital of Estonia). I do not know when mother’s family moved from Revel to St. Petersburg: parents never spoke about it.

When they arrived in Leningrad, mother could not speak a word of Russian. At first father was distressed for her, because she spoke only Estonian language. Later Mom managed to learn Russian, and at home parents spoke only Russian.

Before the Revolution of 1917 Mom worked as a milliner. But after her marriage she became a housewife. I guess she finished only 10 classes.

My parents were able to write and speak grammatically correct. They read much, especially my father. Mom took care of my brother and me. She kept a strict hand over us. Mom was authoritarian.

In the family of mother’s parents there were 3 children: mother’s brother David, mother’s sister Dina and my Mom Eugenia.

A lot of people (relatives and friends) used to visit us during holidays. Mom was a fine hand at cooking.

In Leningrad our life was very interesting: we went to the cinema, to the theatre, took part in dancing sessions, had a good time on the Kirov islands, swam in the Gulf of Finland, and went boating.

I liked to dance very much. I still like it: if they tell me about dancing and good music somewhere, I’ll give up everything and quickly run there. Probably I got it from Mom: she liked dancing very much. She always said ‘Dear me, I see that you will take after me!’

Every year the Leningrad Palace of Pioneers celebrates its anniversary, therefore on February 12 I come to the Palace, watch the official ceremony and take part in dancing.

After that I feel 20 years younger, I really come to life! Together with my wife we won a lot of prizes for dancing tango, waltz Boston, Cracovienne, etc. at different recreation houses.

My parents read much, first of all classics, but they also kept their eye on periodic literature: literary magazines, newspapers. They subscribed for the Leningradskaya Pravda newspaper.

I used a library, and my parents exchanged books and magazines with their relatives and friends. At home there were many books.

Most parents’ friends were from among the father’s customers. Mom was interested in political events, but she was a member of no political party. Her friends shared her interests. Most friends of my parents were Jewish, but there were a few Gentiles. All of them were intellectuals.

When my brother and I were little, parents did not go far away from Leningrad, but later we spent summer in Sochi and other places by the Black Sea.

Before the beginning of the war Mom went to Tallin, where she had a lot of friends. Daddy never left Leningrad before the war.