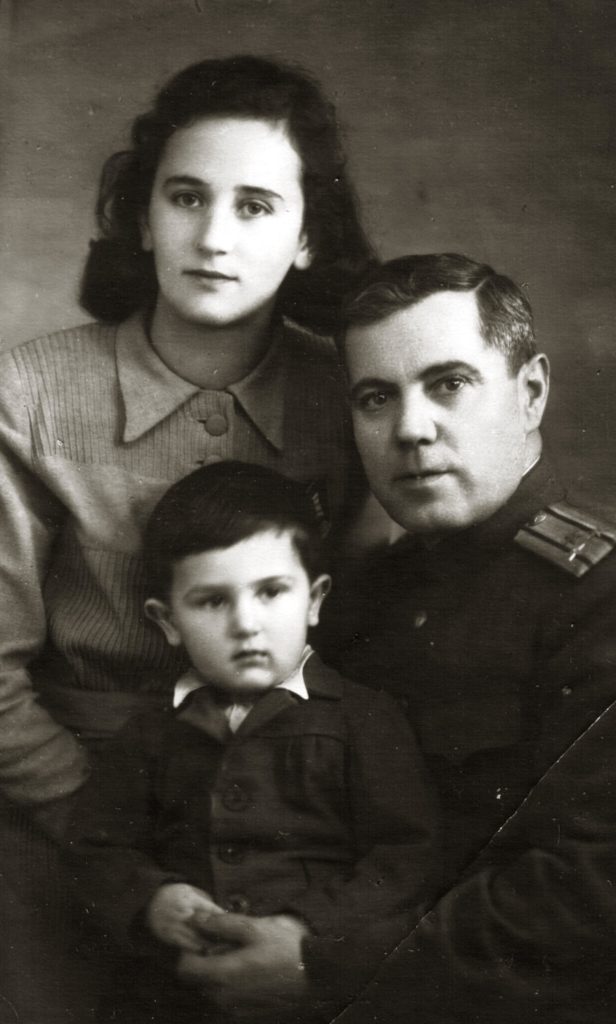 Marina Sineokaya with her son Sergey and husband Pavel Sineokiy

This is my family: from left to right, me, our son Sergey and my husband Pavel. The picture was taken in Moscow in 1951. In the post-war period I got married in Germany. During my service in the army I had a lot of wooers, who confessed their feelings, and proposed to me, but I didn’t like anybody, I was only ready for friendship. My husband-to-be, Colonel Pavel Sineokiy, was assigned the commandant of Greifswald. Later Pavel told me that he fell in love with me at first sight. In fall 1946 we got married in Greifswald. Pavel was much older than me. He was born in 1901 in a Cossack settlement near Kuban. He came from a peasant family. Pavel’s father was Miron, but I don’t remember his mother’s name. His parents passed away before the war and I never met them. He had two brothers. Pavel left his parental home before the revolution. He was a great horse-rider like the rest of the boys in the Cossack settlement. That is why he went to the Cossack regiment of the tsarist army, from there during the revolution he went to the cavalry. In 1946 I was demobilized from the army and went back to Moscow. My husband stayed on in Germany. My parents came back from evacuation in 1946. I moved in with them. As I had the certificate that I had finished one course at the Foreign Languages Institute, I was enrolled for the second course. In September 1946 I resumed my studies at the institute. The post-war life was certainly difficult. Those were the years of starvation, though my family didn’t suffer from famine. My husband sent his certificate to us, and military people were maintained well at that time. At the end of 1946 my husband was transferred to Moscow. He was to be allocated to the general army headquarters in Moscow. Soon he was conferred with the rank of a general. We still lived in the communal apartment with my parents. My family got along with Pavel very well and treated him as their flesh and blood. In September 1947 our son Sergey was born. It was very hard for me but I didn’t want to miss a year of my studies. There was nobody who could help me. My mother worked. In the morning I suckled the baby, swaddled it and left for my classes. My son was at home by himself. I went back home in the interim between classes so I could suckle the baby. It was a long way from the institute. I had to take a metro and then change transport. I strained off my milk in the morning before leaving for the classes so that my neighbor could feed the baby from the bottle. It was so hard to buy things for my baby. I was lucky to buy a swaddle or a baby shirt. After classes there was a ream of laundry for me to wash. I also had to cook food, clean the apartment and do other chores in the house. Our neighbor wasn’t a very pleasant man; he constantly had an attitude, being irritated by my baby and me. There were a lot of things for me to do in the room like boil water on the electric cooker, wash the baby, do the laundry and dry it. It was a hard way of life, but in spite of that I went to classes and took exams. When the baby got a little older, it was easier for me.