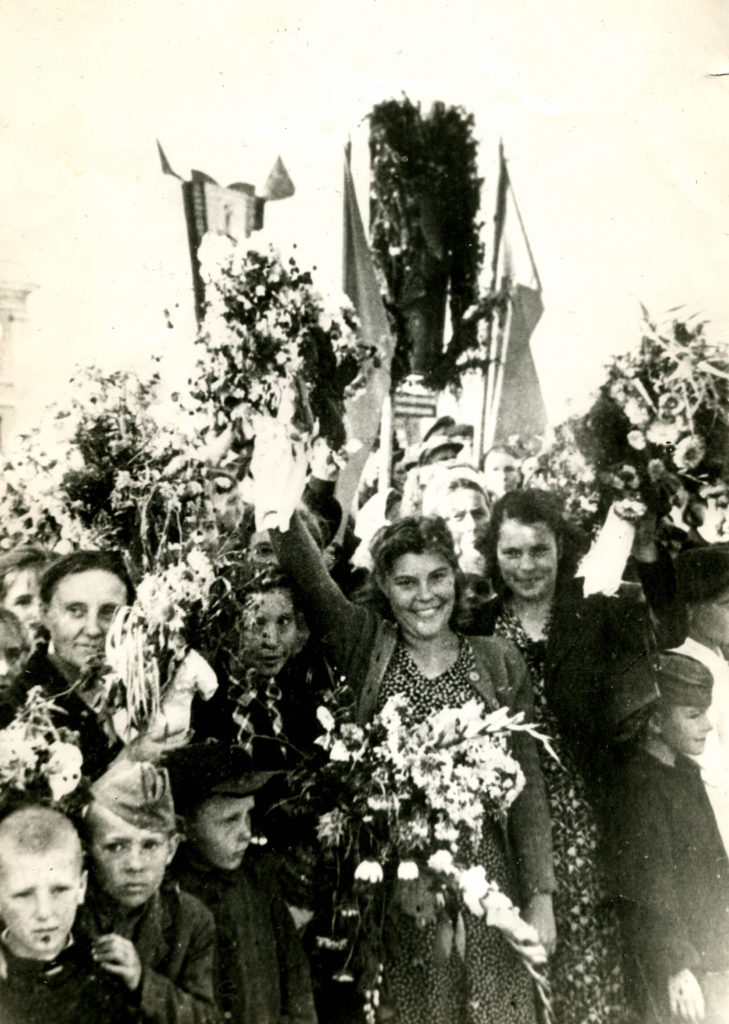 This photo was taken in Slutsk on Victory Day, 9th May 1945. This was a great holiday for the population of Slutsk.

I am the second on the left at the bottom. I don’t know anybody else in this picture. They are just happy residents of the town in the street. I’m wearing a soldier’s field cap.

When the Soviet troops came to Slutsk, people were throwing flowers, and they threw their field caps to us in return, having nothing else to give. I wore mine for a long time and was very proud of it.

This photograph taken by a street photographer, and was kept in the town museum for a long time. Recently they made a copy of it, and gave me the original for the memory.

During World War II Slutsk was ruined, almost all of it. Lenin Street, the main street in Slutsk stretching all across the town, was in ruins.

One could see the street from one end to another, see the destruction and everything the Germans had done. Slutsk burned down twice: when the German troops were advancing and when they were retreating.

I, Mama and my brother received one room in the house where the owner was still in evacuation. The 3rd secretary of the Slutsk district party committee was accommodated in two other rooms of this shared apartment.

We celebrated Victory Day, 9th May 1945, in this apartment. This was so much joy, and a true holiday in the town. People came out into the streets rejoicing, hugging each other and crying.

There was a monument to Lenin in the center of Slutsk, in front of the executive committee.

When the Germans occupied Slutsk, they pulled the monument down, but the pedestal was still there. It was decorated with red banners and flowers on 9th May, and in the evening people danced and sang there.

My brother and I were raised to be patriots of our country. We were Soviet children: the pioneer organization, Komsomol and the Party were sacred to us.

Even after the war, during this hard and hungry period, our country and our town celebrated Soviet holidays like we used to do it before the war. I always went to parades with my school on holidays.

I can still remember how overwhelmed with joy I was, when I marched in the column of parade makers, and there were flowers and flags around, and the sound of appeals:

‘Long live the Soviet pioneeria and the Komsomol!’ I remember how wonderful this was!

This was great, beautiful, active and patriotic! Even now, when people of my generation get together and recall these parades on 1st May, October holidays, and Victory Day, tears fill our eyes.

The people were living in it spiritually, and this was passed on from one year to the next. This was wonderful, just wonderful!