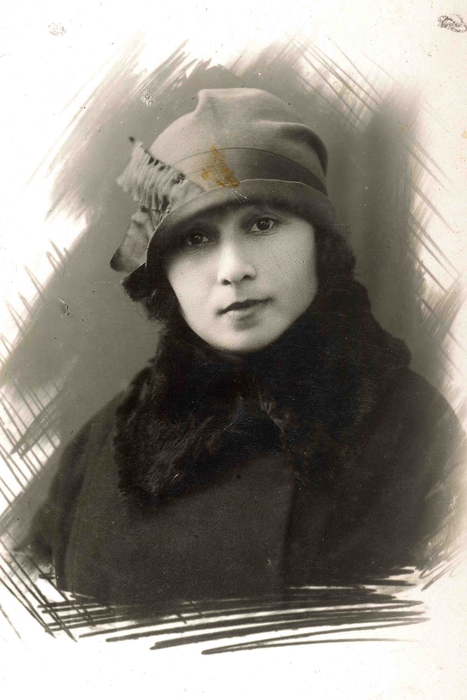 This photograph was taken in 1920s in Minsk. It shows my aunt Sonya.

The only relative of ours, my aunt Sonya did it when she lived together with grandfather and grandmother.

After grandmother’s death she lived with grandfather and cooked kosher meals for him. Later she got married, but still observed kashrut.

Grandfather worked at a small shop, he was its owner. Financial position of the family was not very good.

We went to grandfather. Grandfather, aunt Sonya and two little children could not leave Minsk during the fire, but they survived the bombardment: all houses around were burned down except theirs.

When I asked aunt Sonya how they managed to survive, she answered ‘Lena, you know that I believe in God; I was sure that God would help us.’ They curtained windows with wet bed sheets and saved their lives.

Moissey, aunt Sonya’s husband was at the Leningrad front, they corresponded with each other, but at the end of the war aunt Sonya stopped receiving letters from him: probably he was killed in battle.

Grandfather lodged us in the apartment of uncle David, which also escaped bombardment (uncle David left the keys for grandfather when his family was going to be evacuated).

The ghetto limit went along the street, where uncle David’s apartment was situated. Unfortunately our side of the street was ascribed to Russian area, and the opposite one was included in ghetto territory.

Aunt Sonya was killed in Munsk ghetto together with her little children and my grandfather.