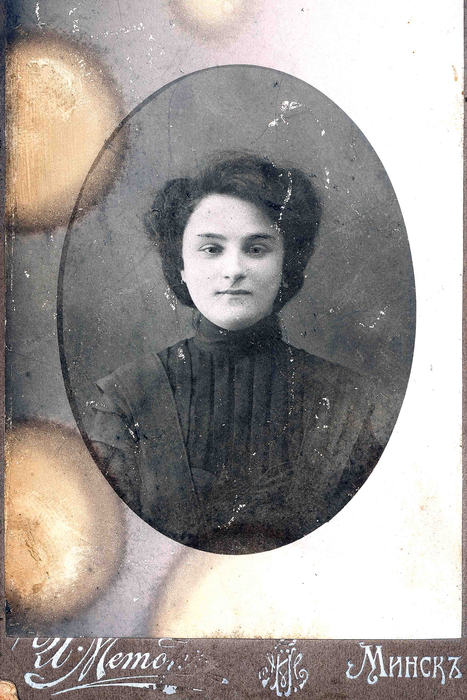 She was my mother’s twin. She was born in Minsk, finished a high school there, married Shabashev and moved to Leningrad.

My aunts Maryasye and Malke left for Moscow to study, later they got married there and had children. They both married Russians. Aunt Maryasye was a teacher of geography.

Aunt Malke worked as an economist at a textile factory all her life long. There she was a local Communist Party leader [a head of the primary organization of employees-cmmunists of the organization]. Her husband’s surname was Sidorov.

Before the war burst out, grandmother visited her daughters in Moscow. She reported that Malke had got a very good husband, although he was gentile. Both aunts survived the war in Moscow and reached a great age.

Aunt Polya got married and left for Kiev. There she continued studying at a pharmaceutical school and became a pharmacist. In Minsk aunt Sonya decided to attend lectures at the pharmaceutical school instead of her absent sister, but they said ‘Hautovskaya, you steal our lessons.’ I heard that story later from relatives.

My mother’s brother, uncle David had a family, and uncles Misha and Shayle were not married. Aunt Polya lived in Kiev, she got a specialty of pharmacist, but did not work: she was a housewife (she had got 2 children).

There Lazar was considered by authorities to be a great expert, therefore they did not call him up.