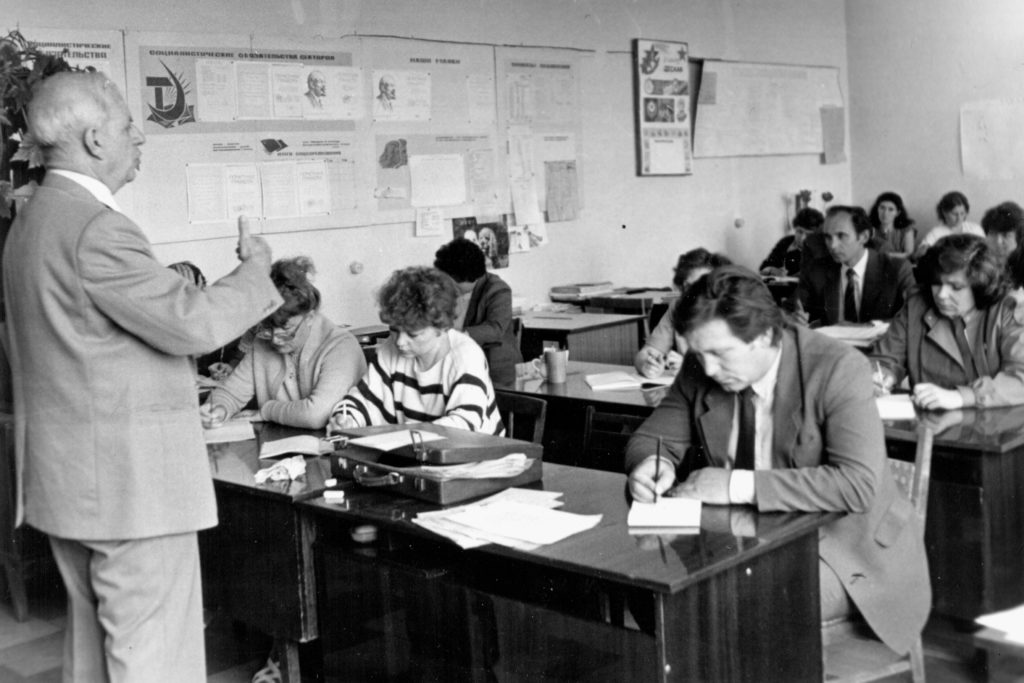 The interviewee delivering a lecture

This photo was taken in 1980. It shows me delivering a lecture. Here I’ll tell you about my pedagogical and scientific activities.

My father-in-law professor Vovsi got ill with cancer. He was diagnosed with cancer. He was one of the best doctors of his time, and he himself predicted he would die not later than in 8 months. Naturally he wanted his daughter to be beside him. He asked my consent to be moved to Moscow. I could not refuse though my service was a dream of service. So I started working at the Navy Staff in Moscow. Together with my wife and 2 children (our younger son Mikhail was born in 1956) we made our abode with my parents-in-law. My elder son Alexander remained in Leningrad (by that time he was a student of the 3rd course, Polytechnic College). In the Navy Staff I served at the operations department (the most secret one), and I was the only Jew there. Perhaps that was the reason why they moved me to another department: Navy Scientific Committee. They did it nicely, and reasoned that it was necessary to satisfy the requirements of my own scientific interests.

In 1960 my father-in-law died. His death was a great loss not only for his relatives, but also for medicine. His patients carried his coffin to the grave in their arms. I am sure that his arrest hastened his death. About a year later I was suddenly deprived of the access permit. They gave me no explanations, but I was sure that the point was in the state anti-Semitism (at that time it flourished everywhere). I felt annoyed with all that, called KGB (Navy representative) and asked for an audience. I met there a polite naval officer. I showed him the list of my scientific articles and he said ‘You are a research worker, why do you work at the Navy Staff?’ I explained that it was not my idea: I had to work there because of my father-in-law’s illness. The officer agreed that it altered the case. Finally I managed to return to the Krylov Academy. There were also some difficulties with accommodation, but the problem was settled. My mother-in-law refused to move with us and remained in Moscow. We returned to Leningrad together with my wife and 2 children.

There I needed an access permit (I lost it in Moscow) and received it rather quickly. I understood that that person from KGB helped me. I worked in the Academy from 1962 till 1973. I worked successfully, wrote several books more and got a doctor’s degree. In 1973 I was 55 years old: it was time to retire. I got demobilized, but did not want to sit at home. I started searching for work. I made a name for myself both in scientific and educational spheres of life. I decided to become a teacher at a college. But it was not so easy: not everyone wanted to have a competitor at their faculty. As a result I found a job at the Institute of Methods and Management Technique (it was organized for improvement of professional skill in the field of new computer technique): my last 5 years at the Academy were connected with computer equipment. I worked with pleasure, taught, and was engaged in scientific work. Five years later I became a head of the department of Automated Control Systems. I worked there 23 years (till 2001). The atmosphere there was very friendly. I managed to write 2 books more and a great number of articles. I also often went on business trips, participated in various conferences. But Perestroika came. It was followed by collapse of the USSR. Many institutes decayed, but our institute managed to survive, though it changed much.