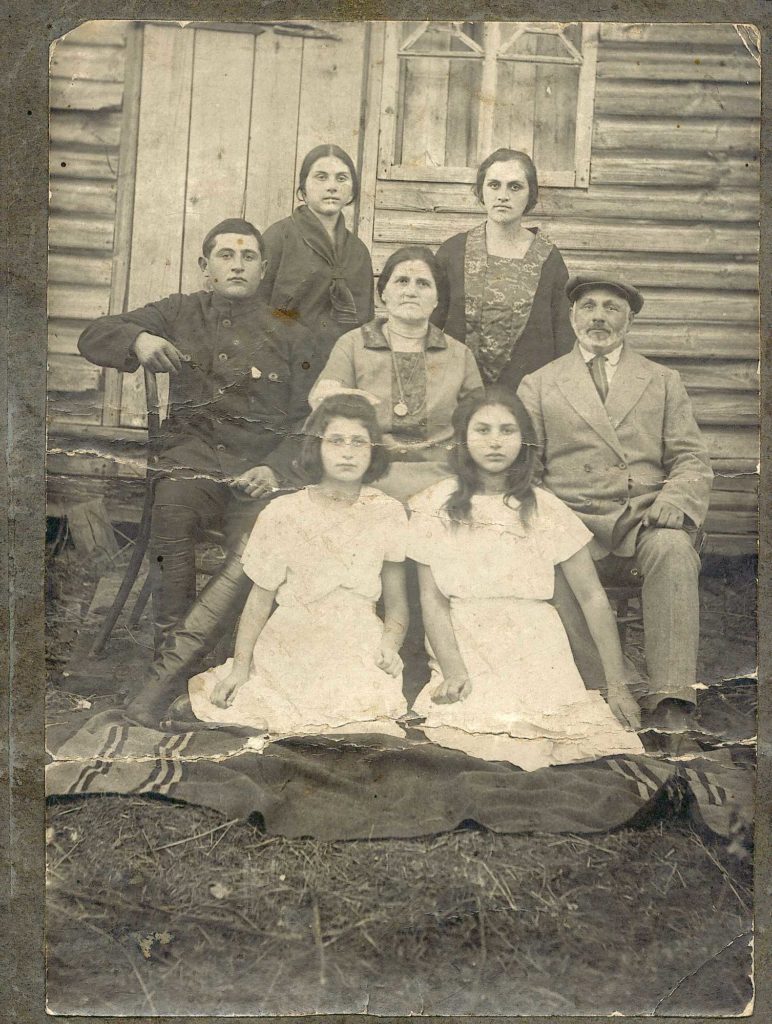 This photo was taken in 1925 on the occasion of the Jewish holiday Rosh Hashanah. Our family is presented near our own house in Sledyuki village, Bykhov district (today Belarus). I do not remember who took the photo.

Sitting in the first row are: my younger sisters Rosa (first from left) and Zinaida. They are sitting on the ground, on a blanket. Sitting in the second row are: my brother Lev, my mother Tsire, my father Mordukh. Third row, from left to right: myself, my sister Berta. We are all wearing our best clothes for this occasion and we are in high spirits; though it was somewhat cool in the street already and we got a little bit cold.

In 1925 my father worked as a chief engineer at the turpentine plant, which he had owned before the October Revolution. Mother kept the house. My sister Berta graduated from school and was going to leave for Leningrad to get further education. My brother Lev dreamed about becoming a military man; he had also graduated from school already. I was finishing the last grade at school. My younger sisters Rosa and Zinaida were also studying at Bykhov school.

Our village was 12 kilometers away from Bykhov. We had a big house in the village – there were five rooms in it. The water was taken from a well, and the house was lit with kerosene lamps. We had an icehouse in our village house. When I and my sisters and brother grew up a little, we made ice cream ourselves. The house was heated with stoves, some of which had stove-benches, and some resembled German fireplaces. We had a vegetable garden near the house. We also kept cattle: two cows and a few calves. We kept the whole household ourselves, we had no servants.

It was very nice in the village of Sledyuki. Father and I would often go to Bykhov in a cart or riding a horse. The road to town was a good one – a surfaced road. We would pass very beautiful places. There were so many berries there! Sometimes when we were riding to his plant, Father would take me to a glade rich with berries and leave me there for a couple of hours. I would eat berries to my fill and gather them in something. When Father came back, we would eat them together. The air was very fresh and pleasant. We had a very nice horse. I remember horseflies twining around her and her brushing them off with her tail.

We, children, were showered with love. Our parents loved us very much. They taught us to labor. And the most important was that we were polite and good to people. And if someone did us good, we always thanked them.