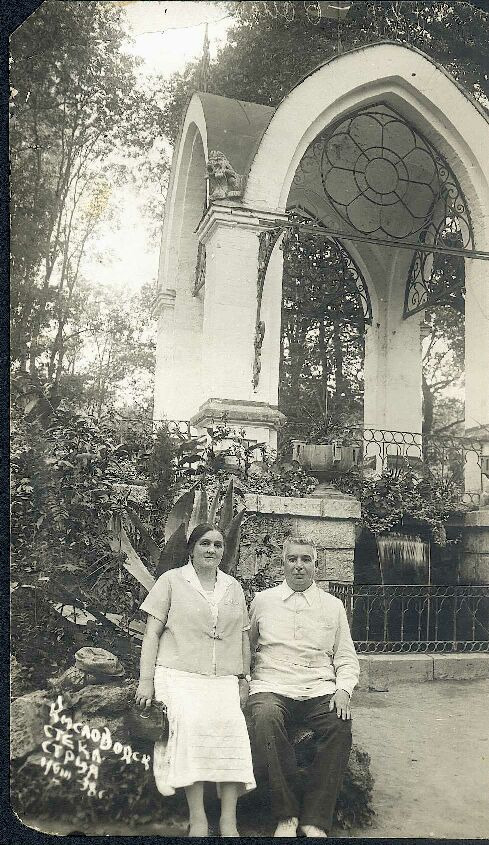 This is a photo of my maternal grandparents, Olga and Mikhail Makhover. It was taken in Kislovodsk in 1938, where they went on holiday.

When the revolutionary events started, Grandfather didn’t emigrate, even though he had an account in a Swiss bank. Later he explained his decision to me: ‘It was interesting to watch and see how the entire story with all those down-and-outs would finish. I couldn’t believe that something would come out of it. I thought that since I’d transferred money I would be able to leave in some extreme case.’

Just after the Soviet power was established, he got to know another Jewish woman, Olga, my step-grandmother, my second Granny, and married her. She had two children, too – daughter Teresa and a boy, unfortunately, he died very early, and I don’t remember his name.

Her first husband, Nesnevich – of course, he was Jewish, how could anyone marry a non-Jew then – was a journalist, he couldn’t take the establishment of the Soviet power and threw himself into the Dnepr River. He threw himself from the bridge, obviously, there was some ice on the river, and he killed himself.

When the searches started, and someone came, my maternal grandparents put all expensive things like different diamonds and so on, in a sack and threw this sack from their window into the snow. They thought they’d find this sack later. But someone else found all those treasures and took them away. Finally, Grandfather was arrested, and the shipping on the Dnepr stopped.

But, after all, the Dnepr isn’t a regular river somewhere in Zhmerinka. The workers said, ‘you should prove to us that our owner is alive, otherwise, none of us will go to work, and you wouldn’t be able to do anything with us.’ And how can you stop the shipping? So they held my grandfather for three days, and all his seven ships were anchored, not moving…

Grandfather told me that when the Bolsheviks let him out, all the ships were anchored in the port and met him with loud hooting. All the staff were in their places. Soon the authorities proposed Granddad to become head of the Leningrad Trade Harbor. And then Granny Olga – I call her Granny because she raised me – said, ‘Mikhail, you shouldn’t have contact with these down-and-outs, I wish you to die in your own bed in your time and day.’ She was a clever woman, wasn’t she? So he agreed, ‘Yes, Olga, you’re right.’

However, it was impossible to stay in Kiev any longer; they were very well known and so on, so they moved to Leningrad. They moved together with my mother, her brother Mikhail and Granny’s daughter Teresa; her son was dead already.

In Leningrad Grandmother together with Grandfather settled in a big communal apartment, which was situated on the corner of Mayakovskaya Street and Baskov Road. Earlier it belonged to one rich Jew, so rich that he was allowed to live in St. Petersburg in Tsarist times.

And after the Revolution they divided this apartment into separate rooms. Granddad had some jobs in Leningrad, but, as a matter of fact, he didn’t have any serious job, perhaps, he decided to behave very modestly, not to attract attention to himself. Granny didn’t ever work.