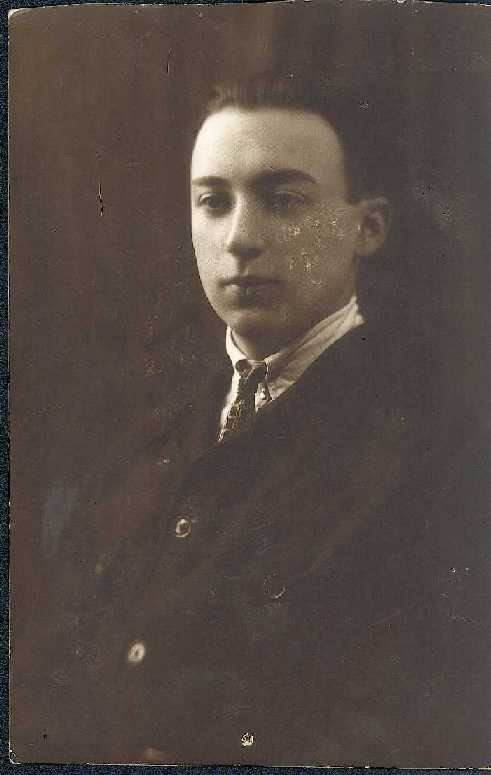 This is a photo of my father Moses Markman, taken in the very late 1910s, or, perhaps, in the early 1920s. I don’t know where it was taken, maybe in Petrograd.

My mother got to know my father just after they came to Leningrad, straight at their home. The point was that in this communal apartment, where my grandparents settled, my paternal grandparents lived, too, they lived there together with their numerous children, including my father. My dad, Moses Markman, born in 1907, was a very handsome man, huge, very tall, with wonderful, gorgeous hair and big eyes. He even had to order his personal shoes. Then there were very few such tall people, and at a small factory, called ‘Skorokhod,’ they made shoes for those, whose size was bigger than 42. And even though my mother was of a very modest appearance, she wasn’t nice or tall, she was much smaller than him and reached only his shoulder, still he liked her, and they got married. It happened in May 1933. I know nothing about their wedding; my parents never recalled it or talked about it.

My parents were completely different people. Mother was a strict woman, she liked to have order everywhere, especially in the wardrobe, and she liked everything lying in a certain order, while my father was a bit bohemian, it’s enough to mention that ‘Carmen’ was one of his favorite operas. All the time he wanted to go out, but my mother was very strict: she said that she wouldn’t go there and would think if she should go to some other place. So they ended up with quite difficult relations, while my maternal grandparents took me in to let my parents stay alone. I think my parents were unhappy together. Granny told me often, ‘Darling, you should remember this for your entire life. Dora is our daughter, that’s why we must be on her side, but it is the woman, who makes the family, and it’s her fault that they aren’t happy.’

Just after World War II started, my dad was demobilized to the army. He was in regular troops, served as an ordinary soldier somewhere, not far from Luga, maybe even in Nevskaya Dubrovka. There he disappeared without a trace.