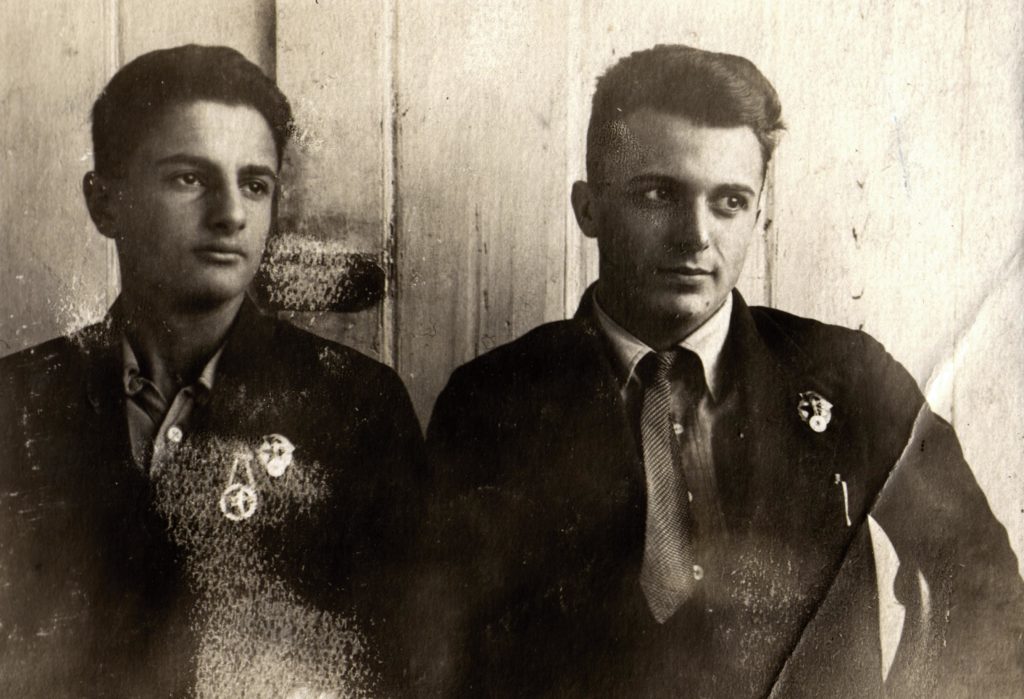 This is me (on the left) with my shooting coach Vladimir.

We were photographed after I was awarded with the badge ‘Voroshilovsky Strelok’ [‘Voroshilov’s Marksman’] for good shooting results. It is on the right side of my breast; the badge on the left is ‘Ready for Labor and Defense.’

The photo was taken in Volchansk in 1936.

At the new school I was also an excellent student. I had a lot of spare time and my mother insisted that I should study German.

A teacher lived next door, she was a German, and she gave me lessons at her home. She mainly taught me communicative skills and correct pronunciation and didn’t pay much attention to grammar.

During my school studies, I took up military training like many boys did at the time. There were many paramilitary circles. At first I joined the glider school and tried to fly. But nothing came out of it: when we were through with the theory and were about to start flying, the glider broke.

Naturally, I attended the shooting circle. Every boy was eager to shoot real rifles; besides we were given special badges for good shooting. Certainly, we didn’t hope to participate in real battles: we were brought up with the idea of our army being the strongest and invincible; we thought that no one would dare to attack us. We didn’t doubt it.

Besides, Volchansk was an unusual town, it was a garrison town. It was not big, but there always were some troops deployed: a cavalry regiment, or an infantry regiment, or an air force corps. We loved our army, perhaps it was in the boys’ blood.

At that time conscription was looked upon in a different way than it is now: it was a matter of pride, we couldn’t wait to be enlisted.