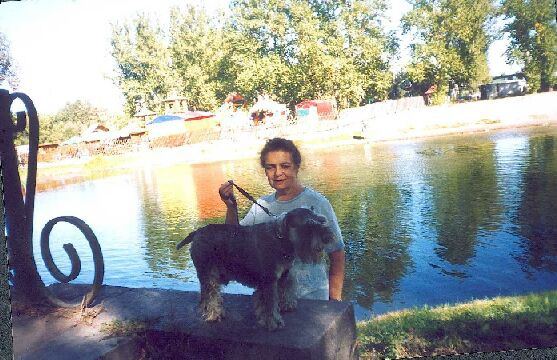 Galina Levina with her dog

This is a photo of me, Galina Levina and my dog Mika. It was taken a year or two ago in the Park of Victory, which is near my house.

I walk there, in this park quite often. Some time ago I met a woman who said that she just loves the portrait of Stalin in which he holds a girl. She argued with me because she didn’t want to agree that this girl was arrested and put in prison upon his order. Finally I had to tell her that she had lived in those times and seen that everyone around her was exiled, that’s why she’d better go tell her stories to those, who don’t know the truth, to those, who didn’t see all these horrors. Really, I can’t understand who is voting for the Communists today, I can’t understand how it is possible?

Another story, connected with my Jewish roots and appearance, is the following one. Once I met a small old Jew, who tried to tell me that I’m Elina Bystrizkaya. He wouldn’t let me go until I told him that I was her secretary, signing the autographs instead of her, and getting ten percent for such a hard job. So I learned I look like a great actress and have a possibility to earn big money!