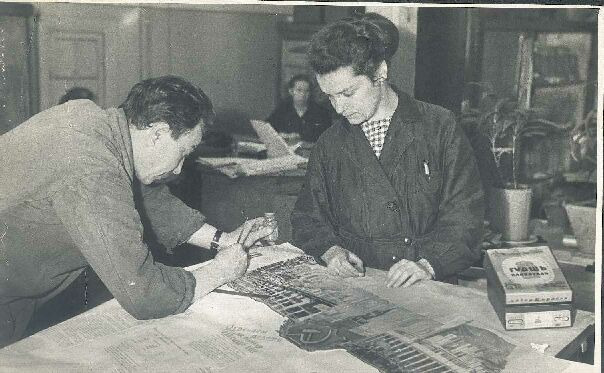 This is my photo, taken in 1962, before my marriage. It was taken in the steel-rolling factory, where I worked for more than thirty years. Here you can see one of my colleagues, and we are making the factory newspaper.

I started to work in the steel-rolling factory, in the instrument department, where I worked my entire life. First I was an assistant to the master, and then I became an engineer-technologist, later I got a constructor position. I spent my entire life in the rolling shop; I didn’t want to leave for the research institute, even though they offered it to me hundreds of times. I thought the rolling shop was something alive. I had wonderful relations with everybody, although my colleagues were very simple people, they could curse with rude words and so on. Anyway, they were representatives of the real working class, not like today. After all, the instrumental rolling shop is always the elite.

One of the workers told me once: ‘So, I went to the impressionism exhibition and looked at all those Degas dancers. And what? There are fat blue women standing, nothing else. That is no good, it doesn’t make any sense.’ So, we discussed this topic. But as a matter of fact they took care of me; they liked to have something extraordinary like me.

I remember only one occasion, but they told me about it many years later. There was a lay-off, and in the dressing room one of the workers said, ‘Why did they discharge Ivanova, and leave Levina? She is Jewish, they’d better dismiss her!’ Then my other mates beat him.

And later, many years later, somebody was talking to me and said, ‘Don’t you remember this guy; we even beat him because of you?’ I asked, ‘How come you beat him? Why?’ Then they told me this entire story. When I first came to this factory, there were quite a lot of Jews, but later we were the only ones: me, because I was nothing, assistant to the master, and a stove-maker. So we, this stove-maker and I, crossing the courtyard, smiled at each other. They dismissed many people, even the head of the industry, and who cared about me?