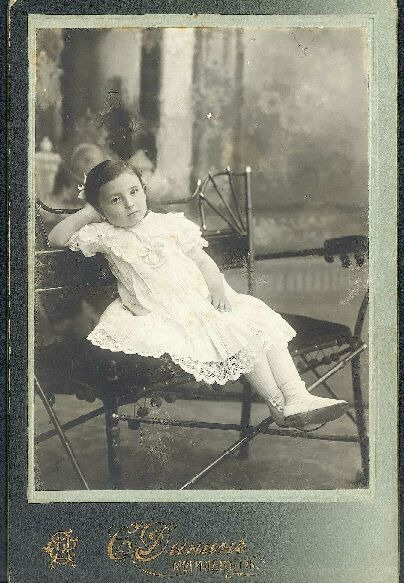 This is a photo of my mother, Debora Markman (nee Makhover), as a little girl. It was taken in the early 1910s in Minsk. It looks like an expensive, good photo, perhaps my maternal grandparents ordered it while they took a trip or went on vacation to Minsk. Or, maybe, my grandfather Mikhail Makhover had some business there.

My mother was of the same age as my father, they both were born in 1907. Mother spent her childhood and youth in Kiev. Of course, she had babysitters and tutors and servants and so on, everything usual for rich families. She studied at the gymnasium [high school], she took music lessons, she learned to sing and, maybe, she had a chance to finish one or two years of Conservatoire. In Leningrad she didn’t have any possibility to get university education, so she entered secretary courses and worked as a typist.

My grandfather told me that earlier, still in Kiev, he had scared away my mother’s fiancé. He didn’t like his checked trousers, while my mother was almost dying for him. Grandfather didn’t want to forbid his daughter anything, so he organized a party and even fireworks on one of his ships on some occasion. And he asked the sailors to act like they were washing the ship deck and to throw cold soap water over this guy in his checked trousers, all over him. Mother, being 15 only, saw all that and never met him again, of course she stopped dating him, because he looked funny.