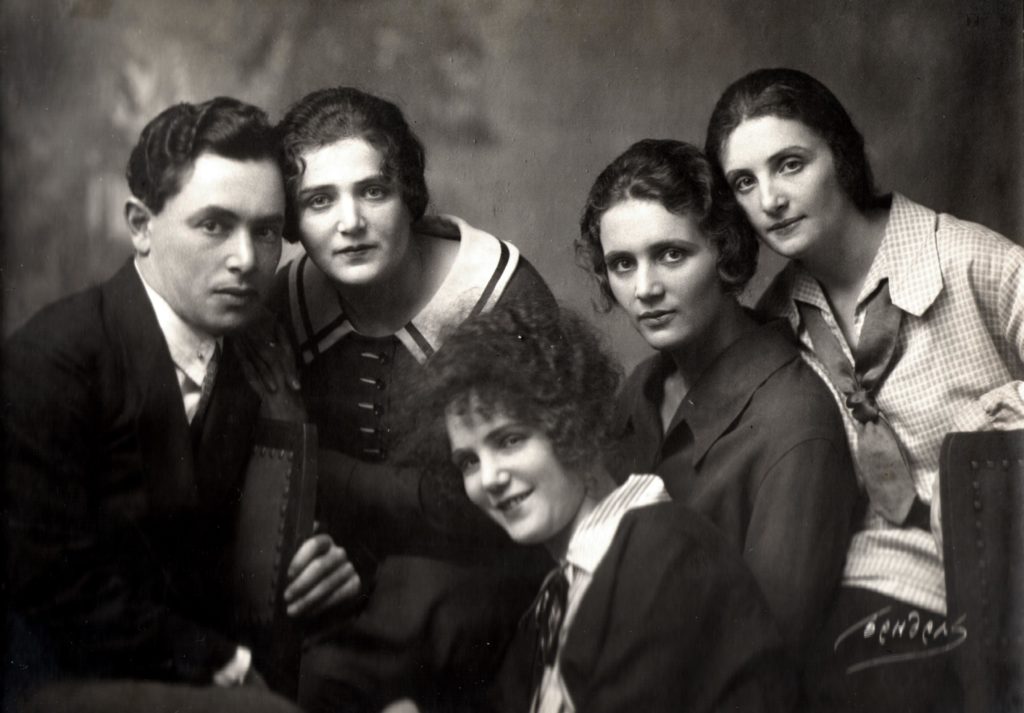 These are all the children of the Ogranoviches: my mother with her brother and sisters. From left to right: David, Revekka, my mother Maria and Ekaterina. Matilda is sitting. The picture was taken in Nikolayev in 1918.

The eldest was the only son. His name was David. Then, my mother Maria was born. Her sisters Revekka, Matilda and Ekaterina followed. I don’t remember when they were born, I only remember the succession. I don’t know whether my mother or her sisters had Jewish names. They might have had Jewish names, but they weren’t used in the family. My grandparents were religious. Jewish traditions were kept in the family. Sabbath and Jewish holidays were celebrated. While the children were small, they took part in the religious life of the family, and when they grew up they became atheists. Of course, all of them went to their parents’ place for Jewish holidays, but they just merely paid a tribute to the tradition.

In spite of the fact that my grandfather was a common worker, he wanted his children to get a good education. All of them went to a Russian lyceum, as there were no Jewish lyceums at that time. The eldest son, David, acquired a musical education after finishing the lyceum. He played the violin very well and played with the orchestra of the Bolshoi Theater all his life. The daughters didn’t go on with higher education after finishing the lyceum as they acquired such comprehensive and deep knowledge in the lyceum that it was enough to work in pretty serious positions. Revekka was the only one who left for the Latvian city Revel [today’s Estonian capital Tallin] and entered a university there, but she left the university with the outbreak of World War I and went to a front field hospital as a nurse. After the war she returned to Nikolayev.

Uncle David married a very beautiful girl, Augusta. She was German. I don’t remember her maiden name. In 1920 their daughter Margarita was born. Augusta had tuberculosis and died in 1925, when Margarita was little. David didn’t re-marry. He devoted himself to raising his daughter, and to work.

Revekka was married to an officer, Mikhail Sevastopolskiy. They had a daughter called Sofia. Revekka was a housewife. She was a great cook, and an impeccable homemaker. She was over the hill when she died and she was the one who had the longest life. Matilda was married to a Russian man, Sobolevskiy. She worked in the Ministry of Foreign Trade. She processed the forms for equipment purchase overseas. Matilda had a son who was my age. I don’t remember his name. Matilda died in Moscow in 1960s. The younger sister, Ekaterina, was single. She worked with Matilda in the Ministry of Foreign Trade. Ekaterina died in Moscow in 1979.