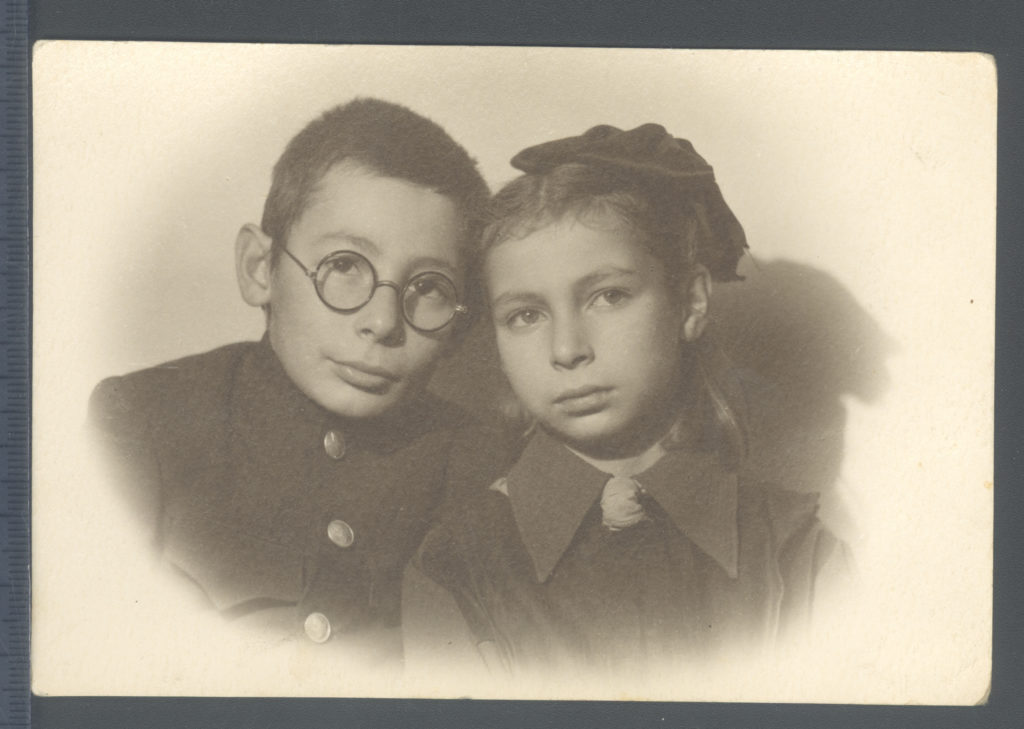 Alla Sasonko with her elder brother

On this snapshot you can see me with my brother Grigory Sasonko in 1946 in Leningrad.

After returning to Leningrad from evacuation our family began to live an ordinary life. Grandfather Mordukh resumed his crafts – soldering and repairing pans.

In the neighboring apartment house there was a room in an apartment where Jews gathered regularly, once a week, and prayed. Ten Jews met there – this was called a minyan. Grandfather called it a synagogue.

Grandfather sometimes took Grigory. Grigory would just sit beside him and listen to the adults praying. Grigory didn’t have his bar mitzvah there. Girls were not accepted.

Grigory got married in 1958. His wife, Lyusya, was a friend of Guta’s daughter. Guta was daddy’s sister, who lived in Alma Ata [Kazakhstan]. When Grigory went to Alma Ata they got acquainted there and he began courting Lyusya.

She came to Leningrad when he graduated from the institute. They got married and left for Krasnoyarsk. Their son Misha was born in 1959 and their second son Kirill in 1968.

Misha married a teacher of mathematics at school, an Armenian by the name of Seda. They have two children who live in St Petersburg.
Misha is a businessman. Kirill became a programmer. Kirill now lives in Augsburg, Germany, with his wife and two children.

My brother Grigory and his spouse left Russia with them. My brother comes each year and we spend our vacations together. We had a very amicable family in general. Grigory and I call each other every 10 days.

I love my nephews. Earlier we spent vacations together, but then, when our children grew up, they started to spend vacations on their own. When the kids were small we traveled to different places:
Ukraine, the Baltic countries, including Latvia and
to Rogachev in Belarus.

All our relatives were very close friends, and it was very painful for us when they emigrated for good.