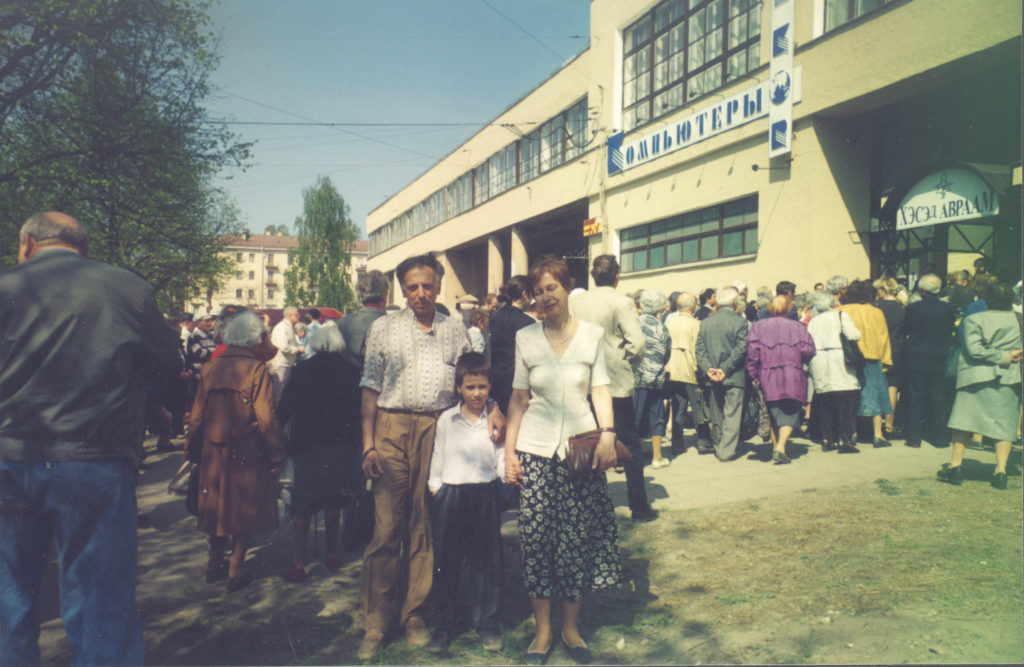 Alla Kolton with her husband and grandson

This is me with my husband Garry Kolton and grandson Semen on the day of the inauguration of Hesed Avraham, the director of which is my son Leonid Kolton.

The photo was taken in St Petersburg in 1998.

I married Garry Kolton when I was in my last year at the institute in 1959, and soon our son Leonid was born. I had a very difficult pregnancy, I suffered from a severe toxicosis – I had nausea,

I couldn’t see or hear, simply couldn’t live. We tried to have a second baby later and I was even in hospital for ‘preservation,’ but we ended up with only one son.

Leonid married his friend Mary Schwarz, a Jew, in 1985. There were many friends and relatives at his wedding, and we had a party at home after their registration in ZAGS [state bureau for registration of marriages, births, etc.]. They didn’t have a chuppah at their wedding.

One year after the wedding a daughter, Zoya, was born to Leonid and Mary. In 1991 a son, Semen, was born, and in March 2002, another daughter, Alexandra. Leonid has worked at the charity center Hesed Avraham since 1993, and since 1997 has been head of this charitable foundation.

Democratization and perestroika have influenced me as much as other people: it became much easier in this country to obtain Jewish literature and discuss Jewish problems. It became possible to celebrate Jewish holidays.

Leonid and Eugenia went to the synagogue to dance on holidays, and I was there too. It was an interesting experience for me. It was in the synagogue on Chanukkah. I just watched, because we hadn’t see anything like that before.

At home we never observed Sabbath. I would not object if my grandchildren celebrated Sabbath. But Pesach, for example, I do celebrate. My friends come along, but we don’t have any special ceremonies. But I would like it if somebody invited me to a religious celebration. However, I am not a frequent visitor of the synagogue.

I believe that Orthodox Judaism is already a thing of the past, not only in Russia, but also in America. For example, quite recently a cantor performed on tour, a woman singer from Los Angeles. Her singing, in my opinion, is already a blend of Jewish, Moldavian and Russian music, which sound in many ways similar to each other.