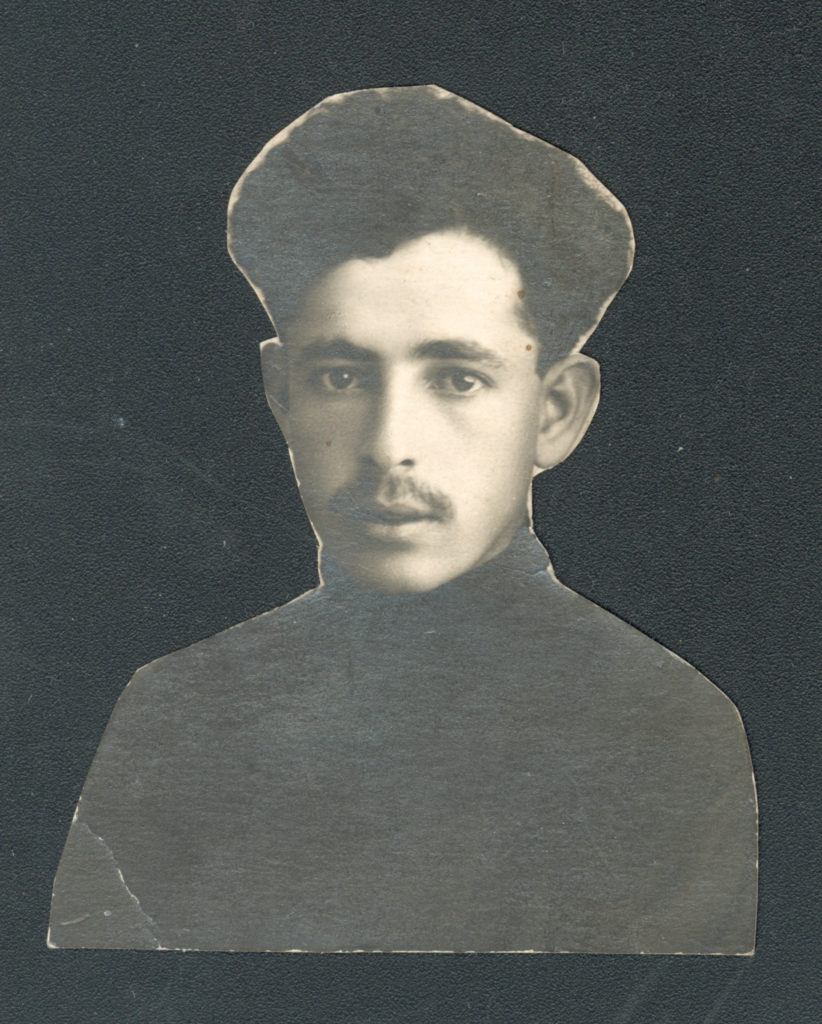 This is my father Samuil Sasonko.

Daddy left home with a friend Zyama in 1919. Zyama later lived in Moscow and frequently visited us. He was friends with father until the end of their lives.

He was 17 years old, and together they ran away from Bobruisk to Palestine and lived there for a few years. Zyama and father knew foreign languages after grammar school and wanted to see the world.

There was disorder in Russia at that time. They got on a train and hid under a shelf. They crossed the border of Russia and somehow reached Palestine in 1919.

Before he ran away father had entered an institute in Bobruisk and the family thought that he had gone to study. When they understood that he’d given up his studies and run away grandmother and grandfather were very worried until they received a message from him.

Later daddy told me how he and Zyama had survived in Palestine: they found a job – they took turns watering orange gardens each night. During the day it was impossible to water because of the heat.

One night father was on duty, another night, Zyama. They earned a little money, and then relaxed and had fun with girls. Once daddy fell asleep and the running water washed off the trees, and they both got fired. Zyama and father traveled all over Palestine, slept in the open air because it was so warm. In summer you could only sleep with your feet dipped in the sea, otherwise it was impossible to fall asleep: the heat was so unbearable.

So they traveled, not having any specialty or means for living. They lived only on casually earned money. This went on until daddy came into a more mature age. When father and Zyama got tired of this ‘fooling around,’ they decided to return to Europe, since it was already impossible to return to Russia.

Around 1923 they passed through Italy, then Belgium, and decided to stop in France. Daddy lived in Paris for a very long time. In his archive there is a photo of a Parisian synagogue.

That synagogue is still there. Father was an atheist and a communist, but when he buried his parents, he made a Jewish funeral in accordance with the Jewish tradition, despite his communist beliefs.