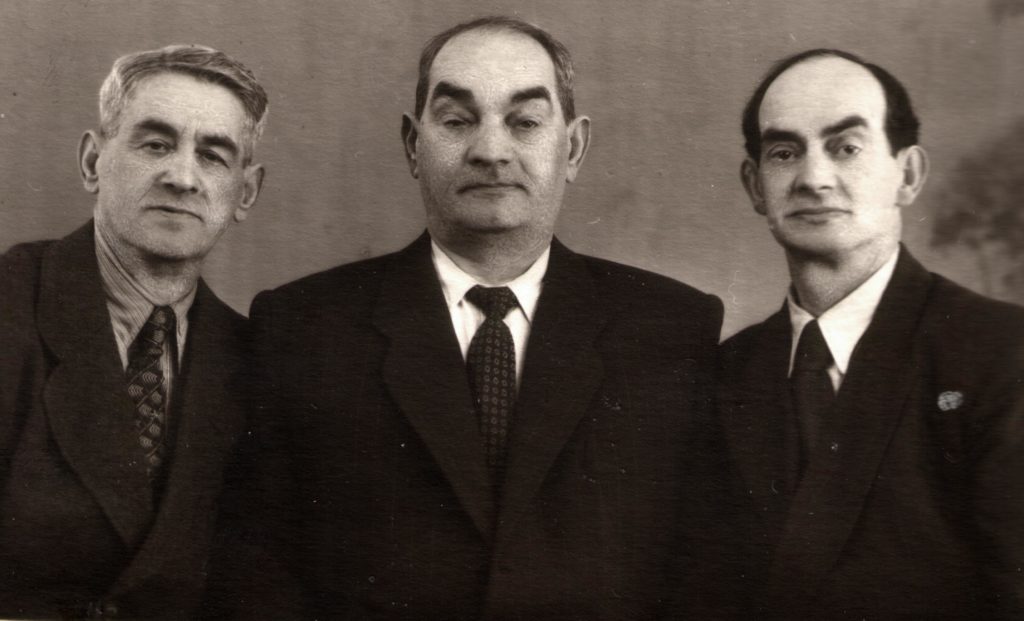 Zinovy Galper with his brothers Beniamin and Mikhail Galper

Left to right: my father Zinovy Galper, his elder brother Beniamin Galper and his younger brother Mikhail or Meilakh Galper.

The picture was taken when father’s elder brother Beniamin came to Volchansk to see his relatives in 1940.

My father’s elder brother, Beniamin, took a great interest in revolutionary ideas. At that time the Bolshevik party was prohibited, and my uncle became a member of an underground revolutionary circle where they studied works by Marx and Engels.

In 1915 my uncle joined the Bolshevik party. In the circle he met his future wife Manya. She was a Jewish girl who had come to Volchansk from a shtetl and worked as a dressmaker.

They joined the party together and got married soon after that. Naturally, they didn’t have a Jewish wedding; communist ideas were incompatible with religion.

The party division they belonged to sent them to Dnepropetrovsk [a city with a population of more than a million in the east of Ukraine, 420 km from Kiev]. Beniamin and Manya settled there, and both of them worked as dressmakers.

They stayed in Dnepropetrovsk and never returned to Volchansk. They had two children. They named their daughter Rosa after revolutionary Rosa Luxemburg, and their son was named Felix after Dzerzhinsky.

In Volchansk, my father got a job at a barber’s shop. Of course, he had no money to start his own business, and, together with his brother Meilakh, he worked for their master.

Neither my father, nor Meilakh took an interest in politics, unlike their elder brother. They worked trying to save some money for getting married and buying a dwelling.
My parents got married in Volchansk at the beginning of 1919. They had a traditional Jewish wedding.