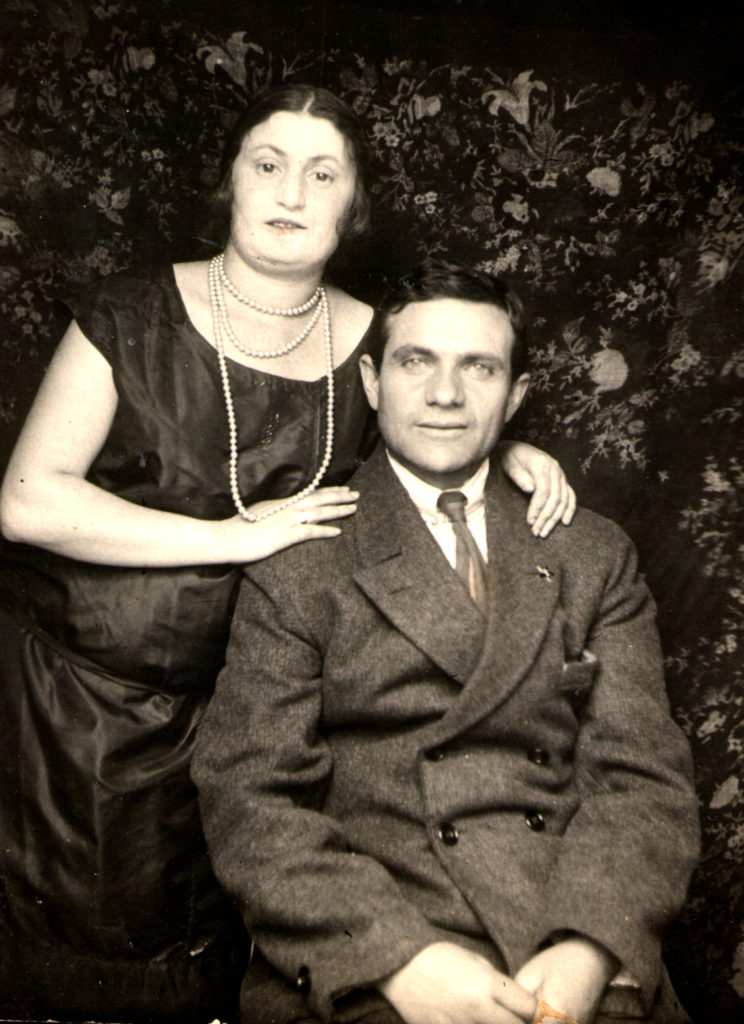 This is my mother Tsilia Zelbert and father Moses Zelbert. The picture was made in Berdyansk in 1926.

My parents got married in 1918. First, parents lived with grandmother and younger sisters. In 1922 I was born. I was called Batsheva. There was no room to swing a cat, when I was born and parents decided to go to father’s motherland, Berdyansk. I think it was important for father that his eldest sister Rena lived there with her family. When I turned one year in December 1923 we moved to Berdyansk.

Father found a job at a shoe factory in Berdyansk. He had worked there until the very outbreak of the Great Patriotic War. Father was given an apartment by the factory. It was a large 3-room apartment on the first floor of 3-storied brick house. Windows faced the yard. In 1925 my junior sister Enia Zelbert was born. We called her Gena. Father was appreciated at his work. Since childhood was knowledgeable about leather as he worked in the shoe stores. Besides he was honest and bona-fide. Soon father became the deputy director of the shoe factory, being operations manager. He was a rather decent salary and we did well. Before my sister was born mother tried to work as well. First, she worked as a cashier at the store. They worked at home being given work by cooperative association of the workers. Mother learnt how to knit stockings on a knitting machine. She handed the ready-made products to the artel. Her health was poor and father insisted that mother should just take care of the household and children. Moreover, there was enough money that father earned. Sometimes in summer mother leased one room to the people who came to our town on vacation or for a treatment. It was also an additional income for the family.

My parents loved each other. Our family was friendly and happy. Father was very kind, tactful and wise. Mother was a beautiful women and a good housewife. She was a great cook. She cooked traditional Jewish dishes best of all. Mother always cooked them for Jewish holidays. For Pesach she baked strudels and made very tasty dishes from matzah. On Purim she baked hamantashen- pies of triangular shape with poppy seeds, raisins and nuts. We enjoyed all those dishes without knowing that they were cooked for certain Jewish holidays. Mother said that she would teach everything when I would need it, but it was not important for me at that moment. She said I had to think of school.

My parents spoke Yiddish between themselves at home. Neither my sister nor I were taught Yiddish. Parents thought that there was no future in Yiddish and wanted us to speak Russian without any accent. Listening to their talks I gradually began to understand Yiddish, then I began speaking it. Father was religious. There was a mezuzah above the entrance door and father came up to it to pray. He marked Sabbath and on Friday evening mother lit candles. Jewish holidays were marked at home. I do not remember whether father went to the synagogue. I even do not remember if there was a synagogue in Berdyansk. These were the years of the active struggle against religion in the country, so all Jewish holidays were quietly marked for other people not to know about it. Moreover, we were surrounded by Russians in Berdyansk.

I remember Berdyansk of my childhood and adolescence. It was a flourishing southern town. In spring acacia trees bloomed and its blossom spread fragrance all over the town. There was a small land plot in front of our house. There were acacia trees and flowers planted between them. Flowerbeds were by almost every house in Berdyansk. We did not plant vegetables. There was no sense in that as they were very available on the market, besides they were very cheap.There was a theater and a very nice park in the center. There was a summer stage there. In summer symphonic orchestras came to us very often. Our family went there to listen to music. There were cabs in the city. I do not remember the cars. In general everything was within walking distance.