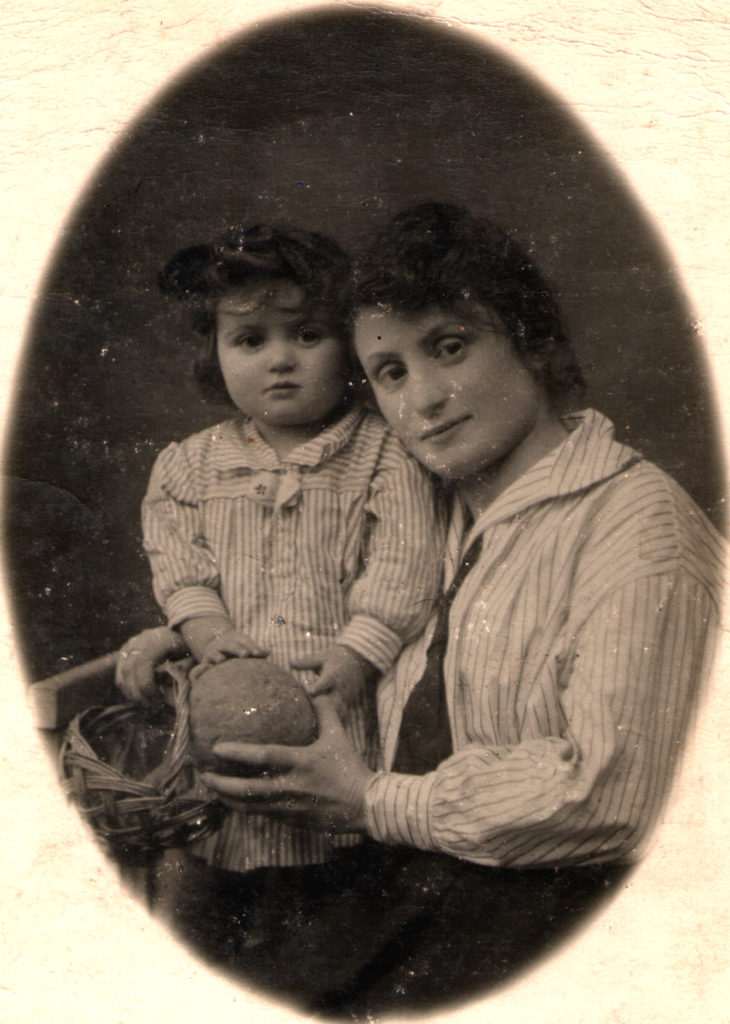 This is my mother Tsilia Zelbert and me. The picture was made in Berdyansk in 1924.

My parents got married in 1918. First, parents lived with grandmother and younger sisters. In 1922 I was born. I was called Batsheva. There was no room to swing a cat, when I was born and parents decided to go to father’s motherland, Berdyansk. I think it was important for father that his eldest sister Rena lived there with her family. When I turned one year in December 1923 we moved to Berdyansk.

Father found a job at a shoe factory in Berdyansk. He had worked there until the very outbreak of the Great Patriotic War. Father was given an apartment by the factory. In 1925 my junior sister Enia Zelbert was born. We called her Gena. Before my sister was born mother tried to work as well. First, she worked as a cashier at the store. They worked at home being given work by cooperative association of the workers. Mother learnt how to knit stockings on a knitting machine. She handed the ready-made products to the artel. Her health was poor and father insisted that mother should just take care of the household and children. Moreover, there was enough money that father earned.

My parents loved each other. Our family was friendly and happy. Father was very kind, tactful and wise. Mother was a beautiful women and a good housewife. She was a great cook. She cooked traditional Jewish dishes best of all. We enjoyed all those dishes without knowing that they were cooked for certain Jewish holidays. Mother said that she would teach everything when I would need it, but it was not important for me at that moment. She said I had to think of school.

My parents spoke Yiddish between themselves at home. Neither my sister nor I were taught Yiddish. Parents thought that there was no future in Yiddish and wanted us to speak Russian without any accent. Listening to their talks I gradually began to understand Yiddish, then I began speaking it. Father was religious. There was a mezuzah above the entrance door and father came up to it to pray. He marked Sabbath and on Friday evening mother lit candles. Jewish holidays were marked at home. I do not remember whether father went to the synagogue. I even do not remember if there was a synagogue in Berdyansk. These were the years of the active struggle against religion in the country, so all Jewish holidays were quietly marked for other people not to know about it. Moreover, we were surrounded by Russians in Berdyansk.

There was a theater and a very nice park in the center. There was a summer stage there. In summer symphonic orchestras came to us very often. Our family went there to listen to music. In summer Berdyansk population was drastically increased due to the influx of tourists. The city boasted on its beaches. The Sea of Azov is shallow and the water gets warm. There was fine sand on the beach. Thus, mothers with small kids liked that resort area. There were a lot of vineyards. They had been bathing in the sea from spring till deep autumn. Mother always took my sister and I to the beach. When we grew up, we went there by ourselves. We took bread with butter, apples and grapes and spent a lot of time there. Then winter came and the littoral part of the coast was frozen. We could skate there. We loved our town. It was good in all seasons.

Mother was a housewife, but my sister and I went to the kindergarten. Mother did it because it was necessary for the kids to be in the team. I remember my group and my child’s minder. We were given classes, taught how to draw, sculpture from plasticine. We had music and PT classes. Mother always made sure than we were neatly dressed. She also nurtured morale in us. We liked talking to father and listen to his stories. Father raised in us benevolent attitude towards people.