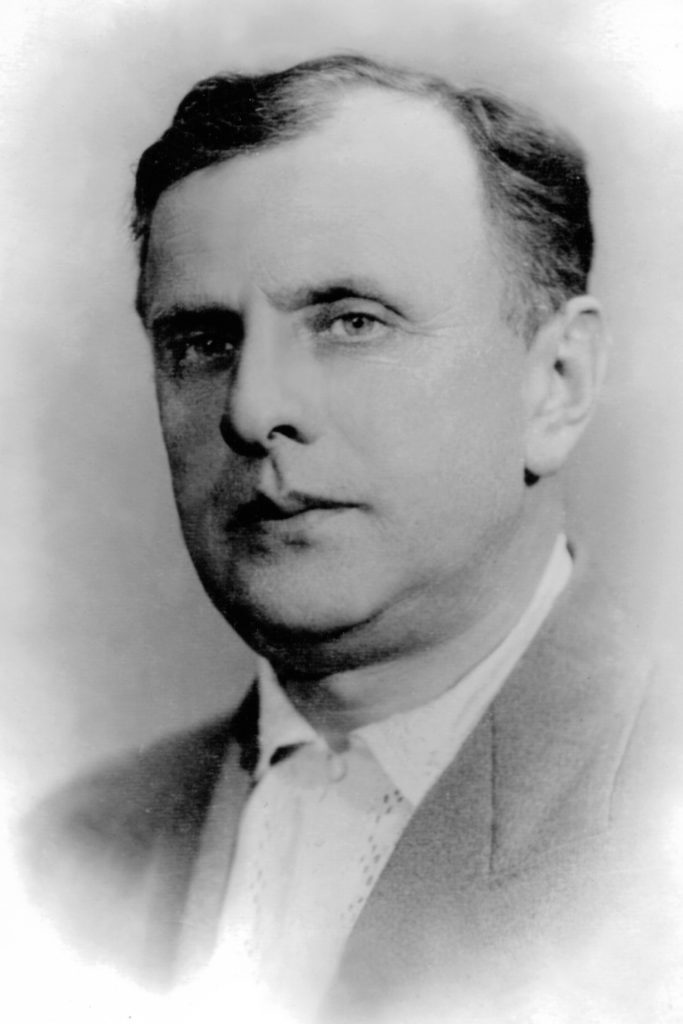 The father of Anatoly Lifshits

This photograph taken in 1946 in Moscow shows my father. Here I’ll tell you about our family and about my childhood.

My paternal grandmother Basye Yakovlevna and grandfather Alexander Yosefovich were absolutely different. They lived in a small Belarus shtetl Kopys near Orsha (on the bank of the Dnieper River). Their family was very poor. Sholom-Aleikhem colorfully described life of such Jewish families in his works. [Sholom-Aleikhem was a Jewish writer (1859-1916).] They had 6 children, my father was the eldest. A small shop helped them to support their life. My grandmother was engaged in trading, and my grandfather used to pray. In contrast to Mom’s family they spoke only Yiddish. The family was very religious. They observed all Jewish traditions. I saw my paternal grandmother and grandfather only several times in my life: they came to visit us (in Ufa) to look how their elder son lived. Grandmother was very strict: she used to say she had come to organize everything in order. Mom considered her words skeptically, but kindly. She always listened to grandmother’s advices very respectfully. And my grandfather used to ask the same question “And where is the synagogue?” He usually took some striped bed sheets and leather belts and went to pray. I was surprised very much: at that time I knew nothing about tallit and tefillin.

Members of my parents’ family were respectful to religion, but (as I already told you) it did not occupy significant place in our life. During Pesach we ate matzot, but also ate Easter cakes and paskha with great pleasure [Paskha is traditional cake baked for Orthodox Easter]. When I was a child, my parents taught me to be respectful to clergymen. Later I read The Tale of the Priest and of his Workman Balda [Balda in Russian means a stupid or not very serious person] by Pushkin. [In that fairy tale the orthodox priest is shown to be greedy and silly.] I was surprised that Pushkin showed disrespect to a clergyman, an orthodox priest in this case. As far as rabbis are concerned, I did not see any during my childhood.

But let’s get back to my father’s childhood. When he was 13 years old, parents sent him away. He went to Vitebsk by a steamship. In Vitebsk his sister lived together with her husband. Her husband had small business connected with textiles. So my father started working there as an accountant. He was not educated, but very capable and purposeful. He managed to pass through exams and got a school leaving certificate without attending lectures. Later he entered a Kiev College for specialists in commerce. So he got acquainted with my Mom being a student.

My father worked in an office. They were engaged in production and sales of pottery. Now I understand that we had not plenty to live. I think so because I remember my father cooking soap for sale at home. I do not know what he made it from. I remember that it was white and blue, and father cut it into pieces using wire. But little by little our financial situation improved, there came a time of NEP. We were not rich, but not poor. On holidays our table was laden with rich food. We used to cook not less than 100 pelmeni [Russian dumplings] for one male member of the family. Family habits were more Russian, than Jewish. It could be seen in every moment of life, including meals. We lived on the 1st floor of a two-storey house. There was a yard covered with grass. I remember that we bought a horse because father had to go on business trips very often. The 2nd floor of the house was occupied by the family of doctor Chernyak. We were friends. Every Saturday adults played preference. So we led a steady provincial life.