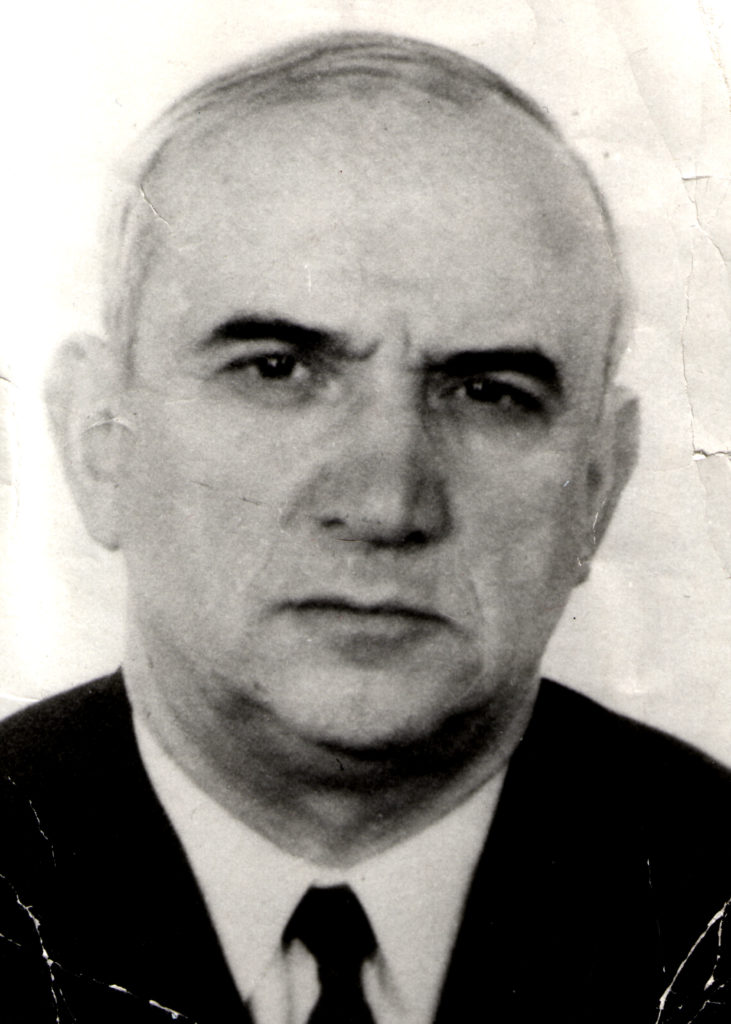 This is my husband Simeon Gorelik. The picture was made in Moscow in 1960.

In 1939 I was admitted to the Moscow Institute of Steel and Alloys and given a room in the dorms. My life became very interesting. New pals, institute, dorms… I went to museums and theatre with my chums. For the first time in my life I was in Bolshoy theatre. I saw ballet Swan Lake composed by P. Chaikovskiy. I was rapt. Then I tried to save some money from scholarship to be able to go to Bolshoy Theatre. During the first years of my studies at the institute I met future husband Simeon Gorelik. Simeon was also a new-comer. He was born in Mariupol [Ukraine, about 500 km from Kiev] in 1911. His father Samuel Gorelik and mother Rosa lived in Mariupol. Simeon’s junior sister Tsilya, born in 1915, lived in Moscow. She finished Moscow Institute of Foreign Languages and worked as a translator. After that she was transferred to Moscow Teachers’ Training Institute named after Lenin. There she defended a thesis in linguistics and worked as a teacher. Simeon studied at our institute at the senior course and was often in that hostel. We met there. We must have liked each other at once and decided to date.

The calamity came unexpected. It was a weekend day, the 22 of June 1941. We did not have classes at the institute. All of a sudden the secretary of Komsomol Committee came to the hostel and announced that the war had been unleashed and all students were to come to the institute ASAP. We went to the assembly hall and started listening to the speech of the minister of the foreign affaires, V. Molotov, who informed of the unexpected attack of fascist Germany. Life changed drastically.

In a month after the outbreak of war, Germans started bombing Moscow. There was an announcement about evacuation at the institute. We got on the cars and went to Stalinsk [about 3200 km to the east from Moscow]. Upon arrival I wrote letters to Simeon and father. I did not get a response from Simeon. We did not get in touch for a long time. When we met after war, he said that he was given work in the district party committee. Then he was assigned as an instructor in the departments of the defense industry by Moscow municipal party committee. Simeon was in charge of evacuation of the plants of defense industry, armament and ammunition supply. His work was very tense. He often went to the rear front, to the locations of the evacuated plants. He was rarely at home, so he did not get my letter.

I was demobilized in July, 1945. I went to Moscow. There I regained my studies at get institute. I was enrolled for the 3rd course and moved to the dormitory where I used to live before war. Then I got ill. I had a sharp pain in abdomen and my roommate took me to the hospital. By chance she met Simeon Gorelik, whom I knew before war. I said that I returned to the institute, but was to be hospitalized at the moment. He came to the hospital immediately. We met for the first time after the war and never parted again. On the 2nd of December 1945 we got married. At that t time Simeon worked in Moscow party committee. After 1945 he decided to quit his service at the party and start a scientific career. He left Moscow party committee and entered post-graduate studies by the institute of Steel and Alloys. He was writing candidate thesis for 2 years, though usually it took people 3 years. In general he was a gifted man. Then he defended doctorate thesis [Soviet/Russian doctorate degrees]. All his life Simeon had worked for the Institute Steel and Alloys. He was conferred the title of a professor and an honorable scientist. In 1944 he was conferred with the order of Red Banner. Simeon is still working for that institute. Simeon had a room in a communal apartment. When we got married, I left the dormitory and moved to Simeon.