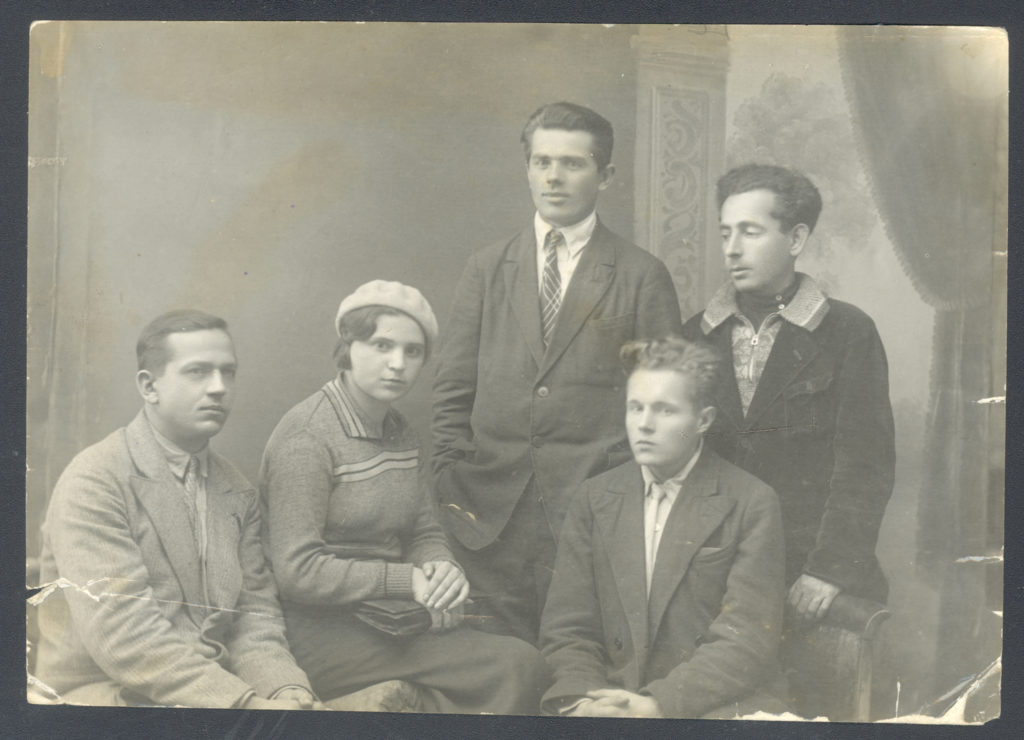 This is a photo of my father Samuil Sasonko (far right) and his friends in Paris in the 1930s. I don’t know who the others are.

Daddy left home with a friend Zyama in 1919. He was 17 years old, and together they ran away from Bobruisk to Palestine and lived there for a few years. Zyama and father knew foreign languages after grammar school and wanted to see the world.

When father and Zyama got tired of ‘fooling around’ in Palestine, they decided to return to Europe, since it was already impossible to return to Russia.

Around 1923 they passed through Italy, then Belgium, and decided to stop in France. Daddy lived in Paris for a very long time.

Daddy had not received a higher education. He settled in Toulouse in France, and worked there at a telephone factory, where they produced automatic telephone stations.

He joined the Communist Party there. At that factory a local newspaper was published. He participated in the publishing of that newspaper and was almost the chief editor.

Besides that, he became chairman of MOPR, he was engaged in revolutionary activity, read the Soviet newspapers. They trusted everything that was written in our newspapers, they were so naive.

Immigrants in France had no right to take part in political activity. Father was arrested there once, put in prison and informed about his possible expulsion. When father was caught for revolutionary activity a second time, in 1932, he was deported from France by order of the prefect of police, Pier Laval.

We have the document of his expulsion from 13th January 1932. It is a direction from the Ministry of Internal Affairs of the French Republic to security services. The graph for nationality says ‘Palestinian’ because he arrived in France from Palestine.

The paper is signed by Pierre Laval. Later on Laval became famous as prime minister of France during the German occupation, but eventually he was executed for his cooperation with Germans.

Father was sent away from France twice, and this is the document according to which he was finally expulsed, because he obliterated the first document. Daddy was taken to the border with Belgium. He passed the frontier, reported to MOPR in Belgium and asked for help.

They asked him who he was, where he came from and where he wanted to go. Neither daddy nor his friend Zyama had received any citizenship – neither French, nor Belgian.

The Belgian MOPR contacted Russia through Germany, and Russia agreed to accept father. In 1932 father returned to Leningrad. On the border they took away his party membership card. He saw Russia and was very surprised by what he saw.