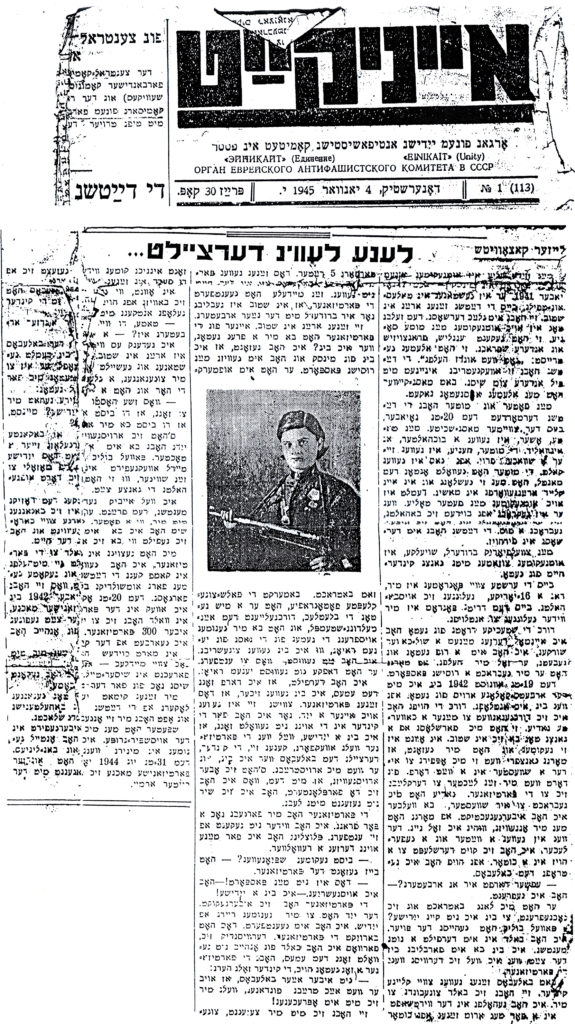 This photograph shows a newspaper issued in Yiddish in 1945 in the USSR. There you can see my photograph: I wore uniform and held a gun, because I was a member of a partisan group.

I became a member of the Moscow landing group in September or October 1942. Since that time till July 1944 I was one of the partisans. The group grew into a brigade, later the brigade developed into a formation. All the time we acted in the same region. Our base was in Stayki village.

In 1943 in a battle I was wounded in my back (a splinter went into my back). Our formation was supervised from the center of partisan movement in Moscow. Later Franz Dvorack, a Czech became our commander.

Having been wounded, I got into the partisan hospital. Partisans lived in earth-houses both in the winter and in the summer. They never got undressed.

The hospital was situated in earth-houses, too. There worked a very good doctor Svistunenko. He made blood transfusion and then sent me to the farm owners. They helped me to recover: their family was loyal to partisans and supported them.

I became a commandant of the village most remote from the German garrison. There were 7 commandants on the territory. From time to time Germans appeared in our villages.

Once during a meeting of 3 commandants of the near villages Germans came unexpectedly and shot them. But Germans did not dare to approach Morozovka (my village), because on the way there were a lot of other villages controlled by partisans.

In 1944 during running fights Germans blocked us. They set fire to surrounding woods, and we did not know where to go. We ran around the wood. I was together with 2 girls from our brigade. We had crackers with us, but no water.

I carried a sawn-off gun. Girls were afraid of my gun, because without weapon we could be taken for local residents, otherwise we could be only partisans. Therefore we buried my gun.

After that we got an order to clean the woods. Germans broke up into small units and hid in the woods (especially volunteers from among local residents).

They lived in our earth-houses, and we tried to find them. It lasted about a week. That was why I did not manage to be on the Victory parade in Minsk.

I got to Minsk later. Immediately several girls and I got fixed to job: we were secretaries (gave out meal tickets, documents, and characteristics).

Franz Dvorack, my commander told me that as I was with partisans from the very beginning, I had to describe everything in full details (in fact he could not write in Russian). I did it, and only then he gave me my documents.