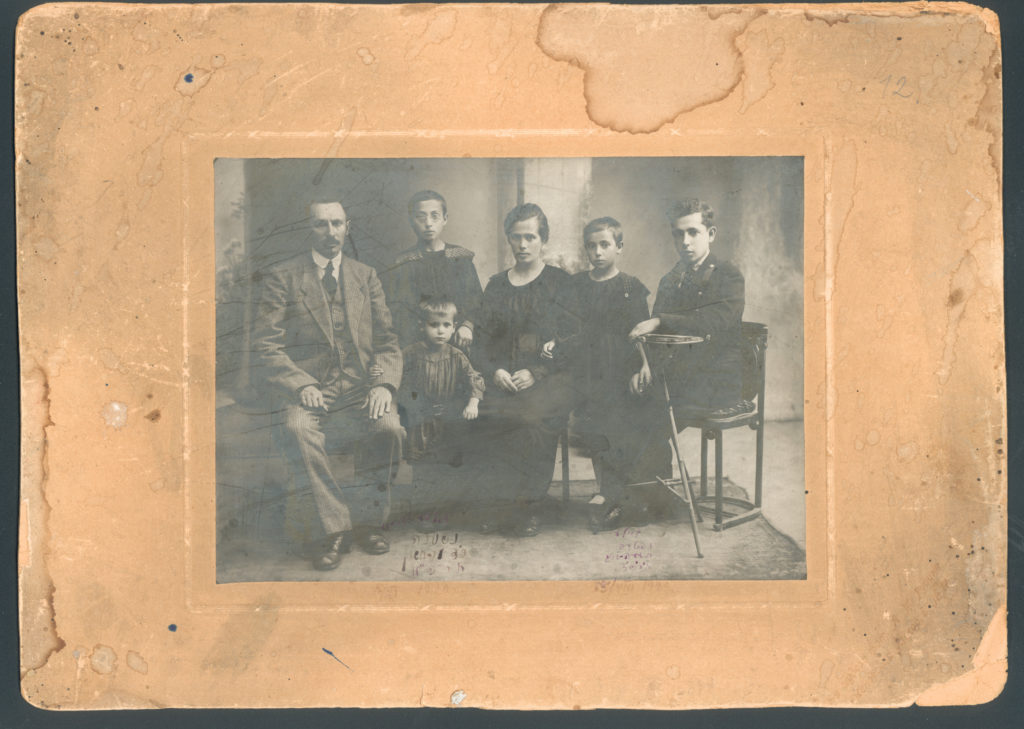 This is a photo of my paternal grandparents and their family. It was taken in Bobruisk. On the far left is my grandfather, Mordukh Sasonko.

Beside him are two of my daddy’s sisters, the younger Ida – she died when she was 5 – and Guta (standing), Golda, my grandmother, is sitting on the right.

Near grandmother on the right is daddy’s sister Bella, the one that was born between Ida and Guta. Bella drowned at the age of 19 in St Petersburg.

On the far right is daddy. He was photographed in his grammar school uniform. Under each person in the photo there is their Hebrew name.

Ida’s name is obliterated, but there is an inscription: ‘Died on 5th November 1920’.

About Bella it says in Yiddish: ‘Bella died on 13th August 1929’. To what year the photo dates back, I don’t know, but father studied in the grammar school then. Most likely, the inscriptions were done by one of the parents, probably, grandfather. Chances are that the photo was taken before 1917.

My grandfather was born in 1879. He was a craftsman, he soldered, brazed utensils and saucepans. Unfortunately, I know nothing about his ancestors and about the family name of Sasonko in general. Neither do I know about grandfather’s brothers or sisters.

His family lived in Bobruisk in the Jewish Pale of Settlement. Bobruisk was considered a poor town and my father’s parents were needy people. Grandfather Mordukh and Grandmother Golda, were certainly religious in their youth.

Grandfather knew Hebrew well. In Bobruisk all Jewish religious traditions were strictly observed. They celebrated all the holidays. On Saturday it was prohibited even to light a match. A Russian woman would come and light a fire. But I can’t tell you about the details.

After 1917 [the Russian Revolution of 1917] when Jews were given the right to live outside the Pale of Settlement, the family gradually started to move to Leningrad and by 1919 they had all moved there. All father’s relatives lived in Leningrad then, and they always maintained good relations with each other.

My grandmother was born in 1883. She was a beautiful woman. She could communicate very well with people and everybody liked her. I don’t know how my grandparents got acquainted, or whether they got married under a chuppah. Nobody told me that.

Golda was literate. She had probably received a home education, but I don’t know the details. All her life Golda was a housewife. During the war grandmother was with us in evacuation in Kazakhstan.

Grandmother Golda suddenly died of cancer at the age of 66 in 1949, before Grandfather Mordukh, who died in 1951.