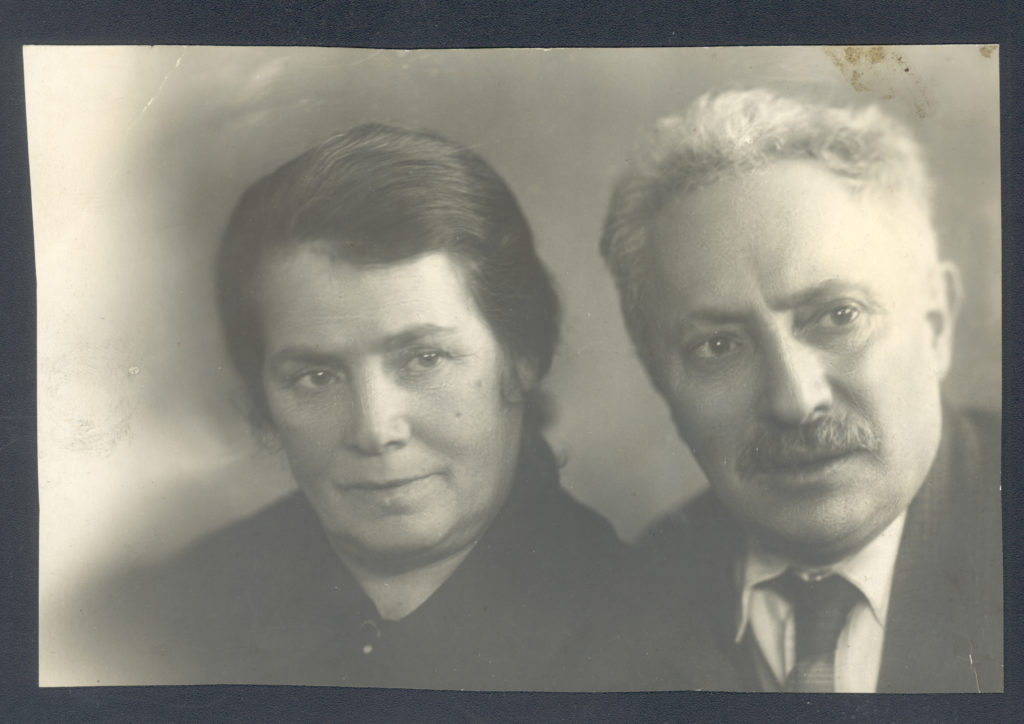 These are my grandparents on father’s side, Golda and Mordukh Sasonko. The photo was taken after the war in Leningrad.

My grandfather was born in 1879. He was a craftsman, he soldered, brazed utensils and saucepans. Unfortunately, I know nothing about his ancestors and about the family name of Sasonko in general.

Neither do I know about grandfather’s brothers or sisters. His family lived in Bobruisk in the Jewish Pale of Settlement. Bobruisk was considered a poor town and my father’s parents were needy people.

They celebrated all the holidays. On Saturday it was prohibited even to light a match. A Russian woman would come and light a fire. But I can’t tell you about the details.

After 1917 [the Russian Revolution of 1917] when Jews were given the right to live outside the Pale of Settlement, the family gradually started to move to Leningrad and by 1919 they had all moved there. All father’s relatives lived in Leningrad then, and they always maintained good relations with each other.

My grandmother was born in 1883. She was a beautiful woman. She could communicate very well with people and everybody liked her. I don’t know how my grandparents got acquainted, or whether they got married under a chuppah. Nobody told me that.

Golda was literate. She had probably received a home education, but I don’t know the details. All her life Golda was a housewife. During the war grandmother was with us in evacuation in Kazakhstan.

After returning to Leningrad from evacuation our family began to live an ordinary life. Grandfather Mordukh resumed his crafts – soldering and repairing pans.

In the neighboring apartment house there was a room in an apartment where Jews gathered regularly, once a week, and prayed. Ten Jews met there – this was called a minyan. Grandfather called it a synagogue.

Grandfather sometimes took Grigory. Grigory would just sit beside him and listen to the adults praying. Grigory didn’t have his bar mitzvah there. Girls were not accepted. Granddad had a tallit, which he took with him.

When grandfather died daddy took all his books and religious accessories there. At home we had two shelves (these books survived the war) with religious books and books on Jewish history in Hebrew with gold stamping. Granddad read them all.

Grandmother hadn’t read these books, but grandfather did, all the time. There were prayer books, the Bible, the history of the Jewish people. Grandfather was an educated man in terms of religion. He prayed at home; he enjoyed talking about Jewish history, which he knew so well, to my brother and me.

But Grigory and I didn’t like to listen. The stories seemed boring to us. After the war grandfather spoke about his belief in God: ‘I believe just in case. Just in case God exists.’ He had his own judgment, his own religious views and apprehension of God.

He respected atheists, but couldn’t honestly accept their positions. Grandmother Golda always prevented him from preaching to children. He tried to tell us something all the time, but I started to listen to him only after grandmother’s death.

I was very sorry for him and I spent much time sitting with him. I spent one whole summer with him. He used to say: ‘You are going to regret that you didn’t listen.’

Grandmother Golda suddenly died of cancer at the age of 66 in 1949, before Grandfather Mordukh, who died in 1951.