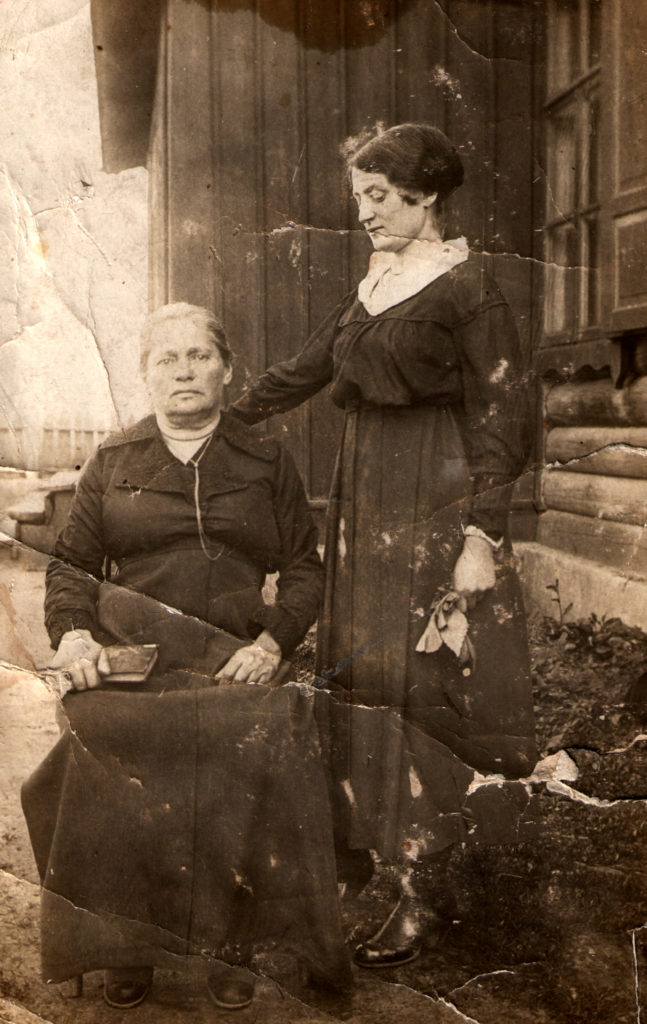 This is my maternal grandmother Mina Shulman and my mother Tsilia Shulman by the house in Smilovichi. The picture was made in 1916.

Maternal grandparents lived in a small Jewish village Smilovichi in Byelorussia, 30 km from Minsk. In 1930, when I was a child, I went to Smilovichi with my mother. I remember that village, motherland of my mom. It was a small Jewish village with wooden sidewalks. People were very affable. The population consisted mostly of Jews, but there were also Byelorussians, Poles and Russians. They lived friendly, willing to help each other.

I did not know maternal grandfather either. He died before I was born. The only thing I know is that his name was Jacob Shulman. I remember grandmother. Her name was Mina Shulman. I do not know her maiden name. There is hardly anything I know about my mother’s childhood Grandfather was a bread-winner and grandmother was a housewife. There were three daughters in the family. My mother Tsilya was the eldest. She was born in 1900. He sister Sofia [common name] [6], Jewish Sosl was born in 1903, and Anna, Jewish Hanna was born in 1906. Grandmother became a widow rather early remaining with three little daughters. She never married again. She lived in a small wooden house, where the whole family could fit. She had neither orchard nor cattle. The only thing she had was a small kitchen garden. When I stayed with grandmother, she asked me to go to the kitchen garden to take fresh cucumbers and eat them. Grandmother planted vegetables in the garden and sold them, for the family to get by. I think grandmother was very beautiful when she was young. When she was elderly, there were still traces of her former beauty. She was a very kind, caring and clever woman. Grandmother was tall and slim. She was reserved and tacit. She must have been religious, because mother learnt about Jewish traditions from her. Grandmother also taught her how to cook Jewish dishes. Grandmother loved her daughters very much and they cared for her as well.

Mother’s sisters also had families. Sofia married a Jew Levinchik from Smilovichi. They lived with grandmother. Sofia had two daughters. I remember Sofia very well. She was a beautiful young woman with fluffy red hair. The fate of the family of grandmother Sofia was tragic. With the outbreak of the Great Patriotic War Sofia’s husband went to the front and there was no information about him. He must have died at once as Belarus took the first hit of the fascist troops. Soon Germans came to Smilovichi. On the first day of occupation they shot a lot of Jews and during one of those actions grandmother Sofia, her children and all her kin from Smilovichi perished.