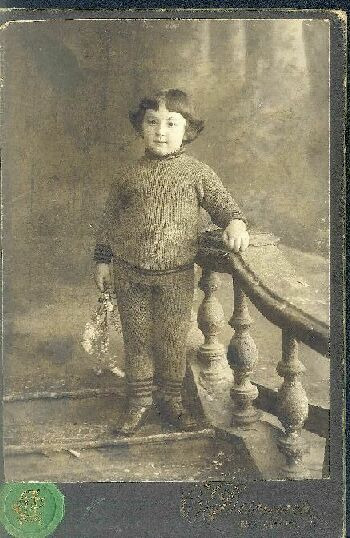 This is a photo of my uncle, Mikhail Makhover, as a little boy. It was taken in the early 1910s in Minsk. It looks like an expensive, good photo, perhaps my maternal grandparents ordered it while they took a trip or went on vacation to Minsk.

Mikhail, my mom’s brother, got university education, he studied in the evenings or, maybe, at external courses. He worked in ‘Svetlana’ industrial co-operation. Mikhail together with his family lived in Lesnoy; Mother didn’t communicate with them too much. I can’t say they weren’t friends or something; it just so happened.

He had a not very pleasant wife, she was a Russian woman, and her first husband was a policeman. She had two adult sons. Everyone wasn’t too happy with Mikhail’s choice, above all my grandpa. Later they had a daughter, my cousin Vera.

Before World War II my grandparents went to the South for vacations and they brought her a present from there: some eastern national costume. Of course, they loved her; she was their own granddaughter, after all. Later we lost touch with each other, and I don’t know what happened to her further.