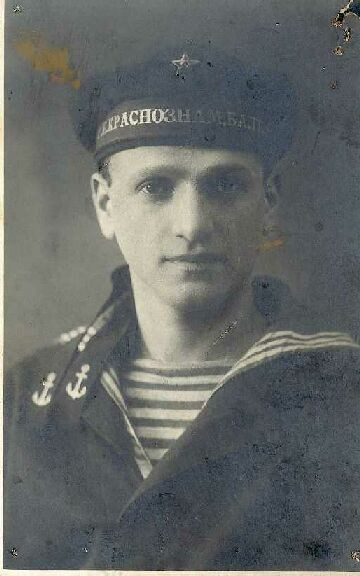 This is a photo of my uncle Mikhail Makhover in the naval military uniform in 1933. It was taken in Leningrad, perhaps, he had to go to the Red Army for a while.

Mikhail, my Mom’s brother, got university education, he studied in the evenings or, maybe, at external courses. He worked in the ‘Svetlana’ industrial co-operation. Mikhail together with his family lived in Lesnoy; Mother didn’t communicate with them too much. I can’t say they weren’t friends or something; it just so happened. He had a not very pleasant wife, she was a Russian woman, and her first husband was a policeman.

She had two adult sons. No one was too happy with Mikhail’s choice, above all my Grandpa. Later they had a daughter, my cousin Vera. Before World War II my grandparents went to the South for vacations and they brought her a present from there: some eastern national costume. Of course, they loved her; she was their own granddaughter, after all. Later we lost touch with each other, and I don’t know what happened to her.

Obviously, Mikhail, my mother’s brother, was an important engineer, that’s why he didn’t have to go to the army. So he stayed in Leningrad, he got some ration, but, perhaps, he gave it to his family. So he died during the blockade, and his wife died, too.

We didn’t keep contact with him and his family, because even though he lived in Leningrad, he lived quite far from us and we didn’t have the strength, we were too weak to go there. After all, my mother lay ill and my grandparents had to take care of her and me and they didn’t have time to go there. So we didn’t communicate a lot during the Great Patriotic War – we didn’t see him often before it either – and then he died.