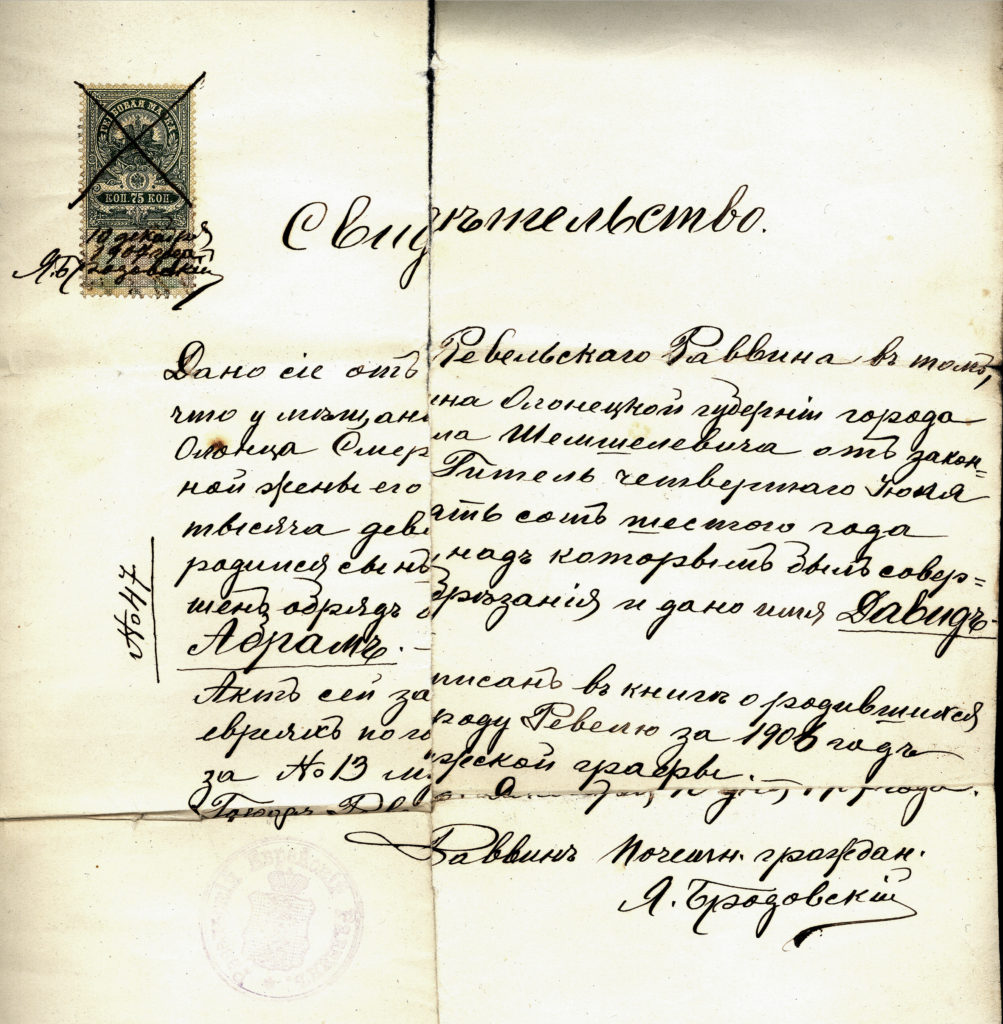 This photograph shows the birth certificate of my uncle David (my mother’s brother). It was issued by rabbi in Revel in 1906.

My maternal grandfather’s name was Smeer (people called him Yakov) Shemshelevich and my grandmother’s name was Gitel Yakovlevna. They lived in Leningrad.

I do not know the place where they were born. I know that they lived in Revel (now Tallinn, the capital of Estonia).

My maternal grandparents had got 2 daughters (my Mom Eugenia Yakovlevna born in 1895 and my mother’s sister Dina Yakovlevna) and a son David Yakovlevich born in 1906.

Grandfather was a person of cheerful nature, a real devotee. He observed Tradition. If I came from school with sandwiches in my schoolbag, grandfather used to comment on it that I should never eat sandwiches. Grandfather attended a synagogue, prayed at home, celebrated every Jewish holiday including Shabbath.

Grandmother helped him to observe traditions, but I consider her to be not religious. I don’t think grandmother attended the synagogue.

My grandfather used to wear secular clothes. He was a good shoemaker, his work was highly commended, and people said he had clever fingers.

One day I visited grandparents carrying sandwiches with bacon in my schoolbag (Mom had given them to me: she did not observe kashrut). Grandfather noticed them and created a scandal.

Grandfather knew that I liked jam very much. Grandmother kept jars of home-made jam in the small cupboard. Grandfather used to give me a table-spoon and a jar of jam and say ‘Start eating quickly, before Granny comes in!’

It did not mean that grandmother was greedy, but she could not understand how it was possible to eat jam with a tablespoon. And I liked it very much.

Grandfather was very benevolent. Grandmother was a great contrast to him: she was strict and not always understood jokes. People who worked together with her, used to say ‘Your grandmother is able to be in command of big military units.’

She always behaved in the spirit of Soviet authorities, but at the same time she successfully helped grandfather in observing Tradition (she carried much on her shoulders). Grandparents were a united family.

Grandfather had a beard, and he put on his kippah only when he prayed. Grandmother did not wear a wig.

Grandfather and grandmother lived in a one-room apartment. The room was large, but there was too much furniture: a big bookcase, a cupboard, a smaller cupboard with jam, a large screen, a sofa, a bed, a table, and several chairs. In the hall there was a hallstand.

Their apartment was separate, not communal. Grandparents lived the two together. Mother’s brother and sister lived separately.

Grandmother was very active at her house-keeping department. My grandparents loved me. Each my visit was a holiday for them. Grandfather and grandmother celebrated all Jewish holidays and invited only relatives.