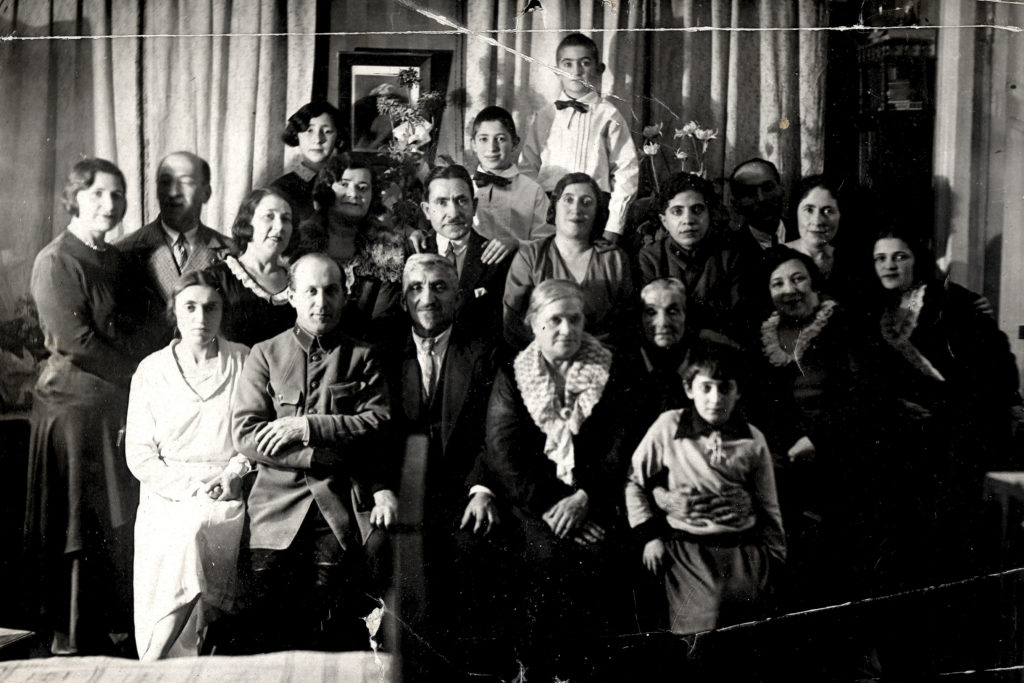 Mark Epstein, his parents, and relatives

This photograph was taken in Leningrad in the 1930s. Here you can see me with my parents and our relatives during a holiday.

When my brother and I were little, parents did not go far away from Leningrad, but later we spent summer in Sochi and other places by the Black Sea. Before the beginning of the war Mom went to Tallin, where she had a lot of friends. Daddy never left Leningrad before the war.

I studied at the school #162. It was situated near the PRIZYV cinema. I studied with pleasure and was very assiduous in my studies. I was able to sit at the table doing my homework for 5 or 6 hours, especially if I had problems with my sums.

I was an excellent pupil. Here you can see my school-leaving certificate, which permitted me to enter the Leningrad College of Cinema Engineers without entrance exams after the end of the war.

My favorite subjects were mathematics and physics. That was why I became a physics teacher.

I do not remember any manifestations of anti-Semitism at school. Frequently my elder brother was not able to do difficult exercises in physics and asked me to do it for him. I did it, and his teacher of physics said ‘I guess it was the younger Epstein who managed.’

At the same time I studied at the musical school. I started there studying piano, but later changed for voice-training. I liked to go to the nearest house of culture for dancing, but it was a problem to leave home, because Mom usually threw cold water on it.

At school I had got a friend Naum Katsunsky. He was the only and the best friend of mine. Here you can see his photo taken in 1945. Together with him we went for dancing, did our homework, and visited each other.

My Mom liked him very much, and his mother liked me too. Naum’s mother was very kind to me and tried to do her best to set a good table for me. Our days off we devoted to film-going. We also often went out on dates with girls. By now Naum has already died.

When a schoolboy, I was fond of reading fiction and liked to retell what I had read. That was the way I developed my abilities of narrator and later it became very useful for me (when I started working as a teacher).

For many years I have been engaged in military and patriotic education of schoolchildren and students of technical schools. [Technical School in the USSR and a number of other countries was a special educational institution preparing specialists of middle level for various industrial and agricultural institutions, transport, communication, etc.]

Boys and girls usually listen to me with great interest, especially when I tell them about the blockade of Leningrad.

My brother Epstein Alexander was 3 years older than me. He was talented for music, played piano very well. At school he was very good studying humanitarian subjects, but other subjects were very difficult for him. I helped him in his studies.

Alexander was a very sociable person, smiling, cheerful, had good chances with girls. My brother liked to improvise on the piano. He read much. Our relations were ideal.

Unfortunately he died when he was a pupil of the 10th form: he was going home from school and boys played throwing pieces of ice at each other. By chance one of those pieces hit him on his head. 3 days later Alexander died. He was hardly 19.

Those 3 days turned my Mom from a brunette into a gray-haired woman. Mom begged the surgeon to save my brother and promised to give him as much money as he wanted, but nothing could be done. My brother did not finish school. It happened right before the war burst out.