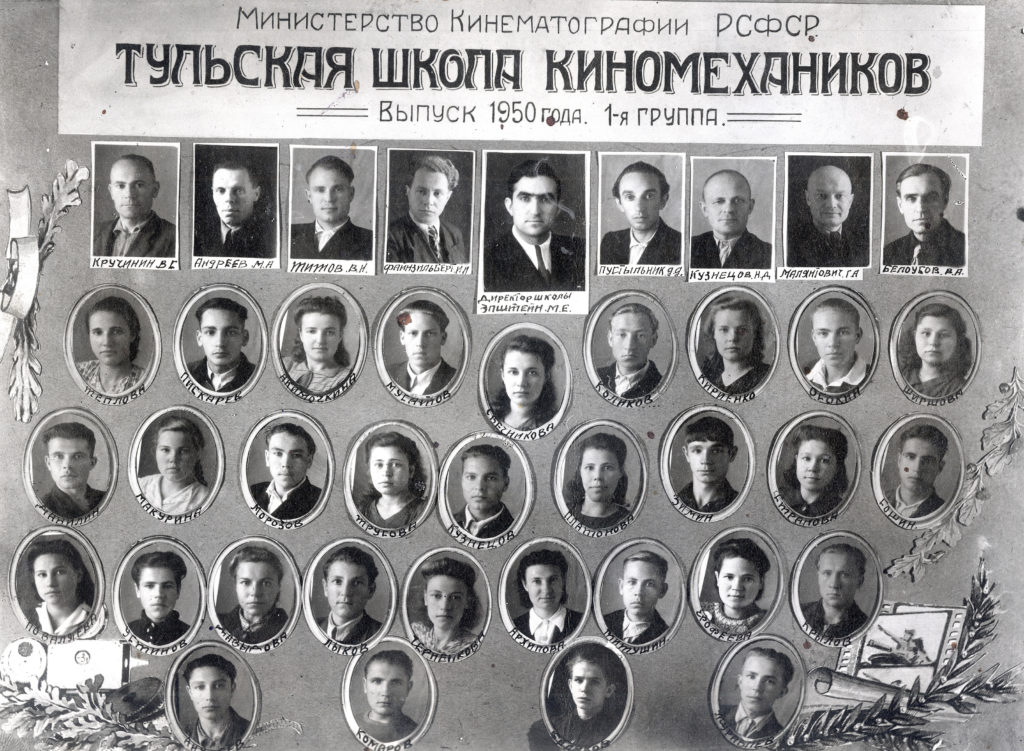 Mark Epstein and students of the Tula Technical School

This photograph taken in 1950 shows graduates of the Tula Technical School and me (its director).

After the end of the war I entered the Leningrad College for Cinema Engineers without entrance examinations, because I was a former front-line soldier and my school-leaving certificate was excellent.

It was difficult for me to study, because I had forgotten almost everything. But I was assiduous in my studies again and 5 years later I got my honors degree of an engineer. Later I was invited to the local communist party committee.

They wanted me to work as a director of the technical school for projectionists in Tula. At that time I wanted to become a postgraduate student and handed in an application. But the head of the acoustics department turned me down.

Later I understood that my item 5 was the reason. It happened in 1950. So I agreed and left for Tula, where I rented a room. I delivered lectures on amplifiers and political subjects. Everything was fine, my school was considered to be good.

At that time my parents informed me that if I wanted to keep my room in Leningrad for myself, I had to come immediately. It was not easy to leave Tula, but they agreed to let me go if I found somebody to step into my shoes. I persuaded a local resident (a projectionist) to fill the position and left.

I arrived in Leningrad in 1953. Stalin died, the age was gravid.

I worked in Tula, when I got to know about the Doctors’ Plot and persecution of Jews – doctors. I addressed a meeting and spoke in defence of them. Communists wanted to take away my party-membership card and expel me from the party. I had a hairbreadth escape.