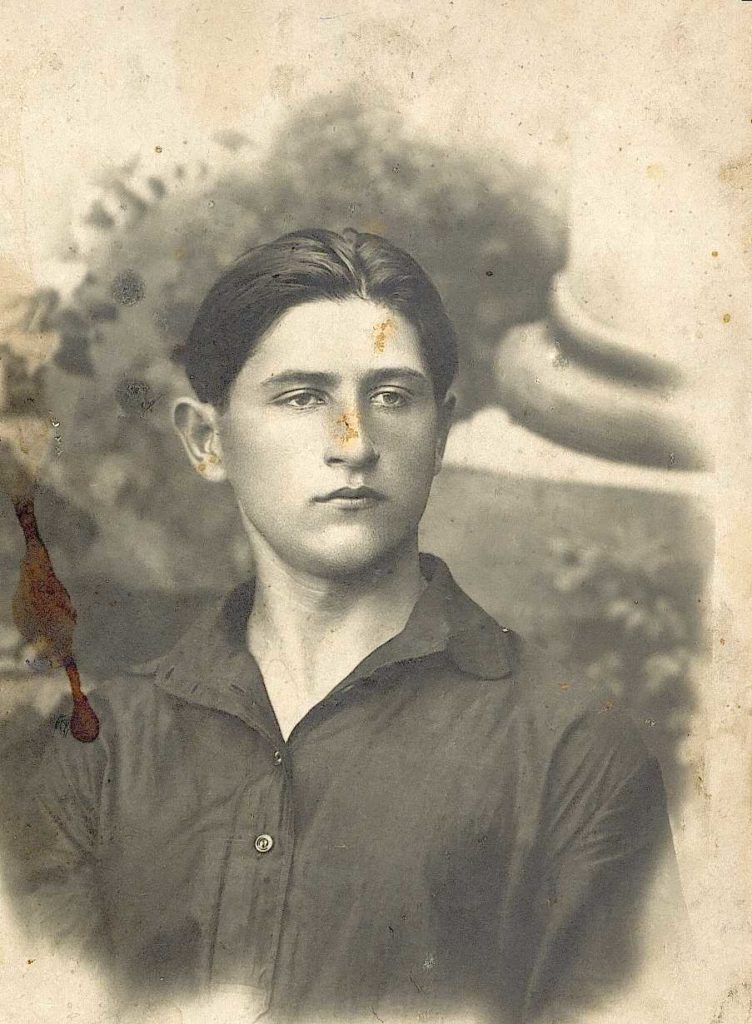 This is a photo of my brother Lev. He was already ill at that time. I do not know where and when exactly the photo was taken, but I believe it was taken shortly before his death in the 1920s.

After Vladimir Lenin’s death, Jews started getting oppressed. My elder brother Lev wanted to become a military man very much. After he had finished school in Bykhov, nobody wanted to hire him for any job. That was all because of his ‘merchant origin,’ and anyway, Stalin didn’t like Jews. Lev managed to get a job at some plant as a worker, thanks to our cousin Ekhiel. Lev suffered from a heart disease. He died at a very young age, in 1932; he was only 25 then. There is one story connected with his illness.

In 1927, my parents were called to the NKVD for a ‘talk.’ I was 17 then, and my brother Lev was 20. My parents were afraid to go there themselves, and they sent two kids instead: my brother Lev and our cousin, Uncle Isroel’s son, whose name was also Lev. Those who talked with them yelled fiercely and threatened them. Lev took it so hard that he fell ill and, lying unconscious, was screaming all the time, ‘Don’t bang with your fist! Don’t shout!’ When Lev fell ill, our father sent him to Leningrad to a very good cardiologist. It was father’s good friend, Doctor Ratner, who advised him to send Lev to that specialist. The doctor said that Lev had endocarditis. This illness was incurable at that time.

In 1931, I gave birth to my daughter. I named her Lyubov. In the same year, my brother Lev came to Leningrad to consult the cardiologist and stayed with us at our place. My husband and I told Lev that Serafim Ivanovich was Russian. My brother didn’t say anything bad about it. He liked my husband. But we didn’t tell my father anything about it then. Next year, in 1932, my brother Lev died. My husband and I went to my parents, to attend my brother’s funeral.