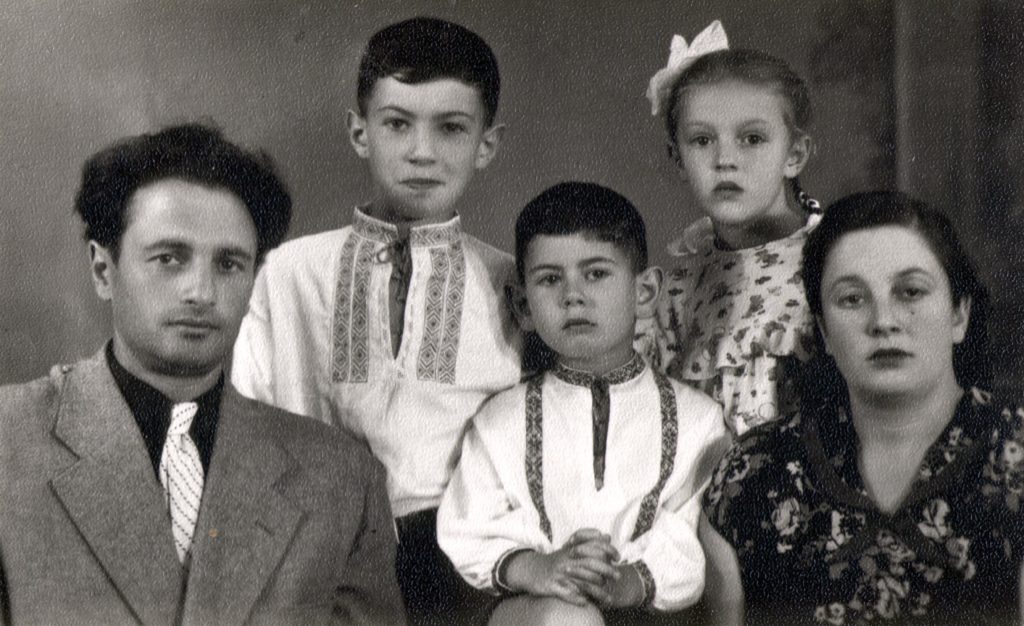 Lev Galper with his family

Left to right: I, my elder son Mikhail, my younger son Vladimir, my sister’s daughter Elena, my sister Berta.

My younger sister Berta, after graduating from the Library Institute, couldn’t find a job. My father’s elder brother, Beniamin, who lived in Dnepropetrovsk, invited Berta to come and stay with him.
He helped her to find a job at a library.

Berta lived with him. In Dnepropetrovsk she met Anatoly Lyubchich, a Jew, and married him. It was Anatoly’s second marriage; his children of the first marriage lived with his former wife.

In 1948 Berta gave birth to her daughter Elena. When Elena finished school she entered the Dnepropetrovsk Medical Institute and after graduation worked as a pediatrician.

My elder son Mikhail, after finishing school, studied at the electrical communications faculty of the Moscow Electro-Technical Institute for Communications.

After graduation he got a job at a company that dealt with security systems for banks and savings banks. Unfortunately, Mikhail got very sick with diabetes and spent more time in hospitals than at home.

That is why he never had his own family and lived together with his mother. He died relatively young, in 1996.

My younger son Vladimir, after finishing school, entered the Moscow Road-Transport Institute. When in the 1970s mass Jewish emigration to Israel began Vladimir quit his studies after the fourth year and left for Israel.

Later he moved to the United States, to San Francisco where he lives now with his family. Vladimir took up photography and is quite successful in this business. He married an emigre from the USSR, they have two daughters.

Emily was born in 1993 and Eva was born in 2001. I keep in touch with him: we often exchange letters and talk over the phone.

In summer Vladimir and his family come here to see us. My son is satisfied with his life and I’m glad things turned out well for him.