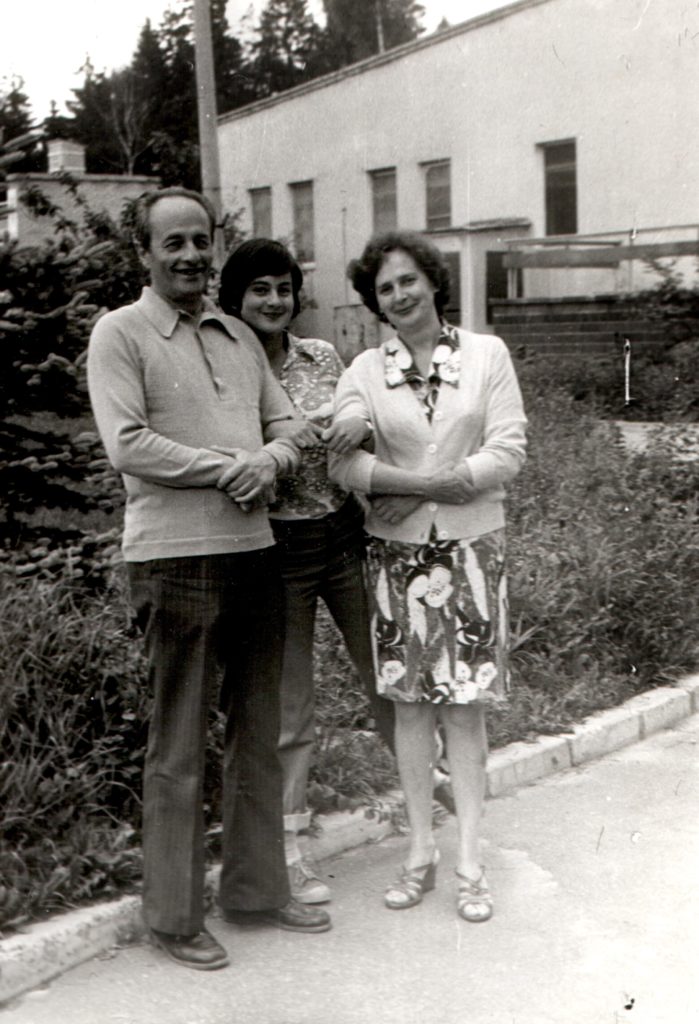 Lev Galper with his daughter Inna and wife Nina Buyanova

Our family picture. We had it taken during our vacation, at a recreation center near Moscow. Left to right: I, my daughter Inna and my wife Nina Buyanova.

In 1960 my wife and I were divorced. Our sons, according to the Soviet laws, stayed with their mother, but I always took part in their life and met with them. But I lived alone. I met my second wife, Nina, quite by chance.

One of them was Nina Buyanova, my future wife. We didn’t date in Leningrad; each of us was busy with his/her own work. It so happened that I had to prolong my business trip. I ran out of money, and my company couldn’t send me more money in due time.

Nina offered to lend me money; we agreed to meet in Moscow for me to return the debt. On the day of our Moscow appointment I was to go to the reunion with my former fellow students.

I was reluctant to go there alone, so I persuaded Nina to come with me. Then we began dating and soon got married.

Nina is Russian; she was born in Moscow in 1935. The life of her parent’s family was hard, so after finishing school she had to start working. Nina got a job at the product-quality inspection of the Moscow optical-and-mechanical factory and worked there until her retirement.

Before our marriage, I introduced Nina to my parents who liked her very much. We registered our marriage at the registry office; everything was very modest. I had left my apartment to my former wife and my children, and Nina had a room in a communal apartment where we started our family life.

In 1966 our only daughter Inna was born. My sons’ attitude to Nina was very warm; she became their friend. They often came to see us and shared many of their secrets with her and not with me.

My daughter studied well at school. She was a young Octobrist, a pioneer, a Komsomol member – like everybody else. After finishing school she entered the economics faculty of the Moscow Institute for Economics and Management.

Inna got married and took her husband’s name. Her name in marriage is Yegorova. She has two daughters: Svetlana, born in 1986, and Yevgeniya, born in 1988.

Inna divorced her husband and now she and her daughters live with us. Svetlana is finishing school this year and will continue her studies after school. Yevgeniya is still in high school.