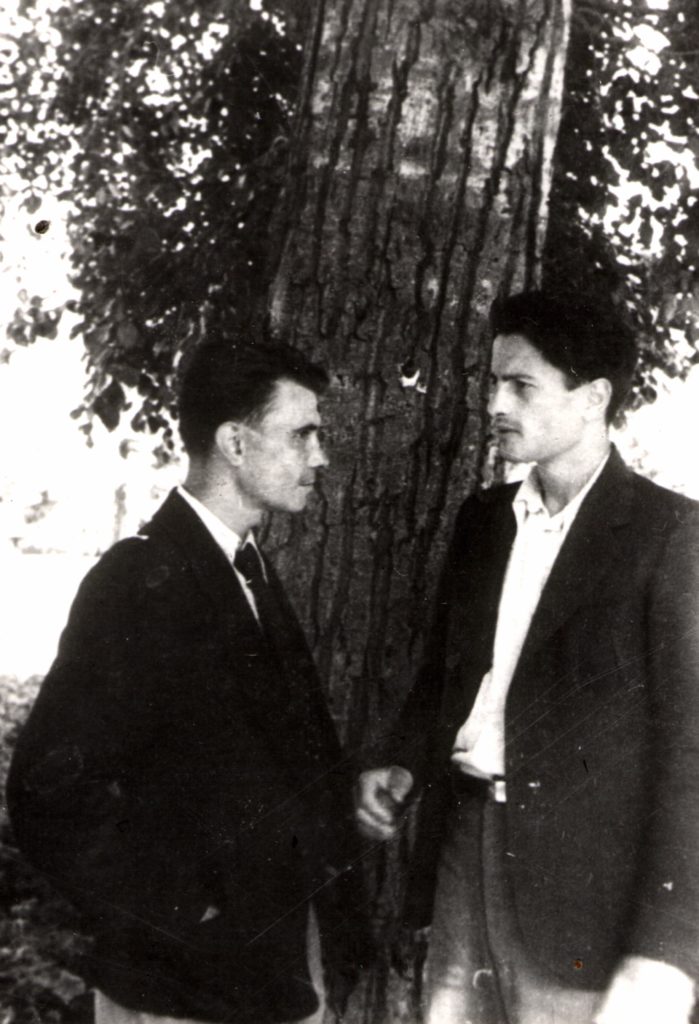 A meeting after the war. I am on the right. On the left is my former co-student from Kharkov, Evgeny Stepanov, with whom I was later in the training platoon together.

Before the war, Evgeny had studied at the Kharkov Engineering and Construction Institute, and we became friends at that time.

After the war Evgeny was passing through Moscow and found me there.

In June 1945 I finished the courses at the Army Institute of Foreign Languages in Moscow with honors. I was sent to work as an interpreter at a captives’ camp in Moscow. There were over 1000 German soldiers.

The camp was called ‘a separate POW working battalion’; officially it belonged to the Administration of Military Construction Works. There was an old unfinished factory near Moscow; actually, there were only walls and a chimney.

The task was to prepare the site for building a factory for fixing military automobiles. The guarded Germans were led there in the morning and worked there all day long. The camp had a guards platoon, about 40 men strong.

We had one civilian there: it was a representative of the Military Construction Administration; he was in charge of the technical issues, mainly the earthwork. We started building a branch road. The engineer brought the drawings and explained what and how it should be done.

In September 1946 I became a 5th-year student of the correspondence department of the Moscow Textile Institute. They sent me teaching materials by mail, but to pass the exams I had to come to Moscow.

In spring I started writing my senior thesis, and I had to come to the institute once a week for consultations with my thesis supervisor. Every time I had to ask Major Tuzhilov for permission to leave. Several times he didn’t let me go explaining he couldn’t do without an interpreter.

When they reprimanded me at the Institute I explained my situation, and they promised to help me. The rector wrote a letter to the personnel department of the Moscow Military District saying that the major was violating the decree of the Council of Ministers permitting students to leave for their studies.

Demobilization took me unawares. It was a hard and hungry period, but, while in service, I got my money allowance and food ration. And when I was demobilized it was all finished.

Besides, I had already been married and my wife was expecting a child. But I had no way back, and that was the end of my military career.