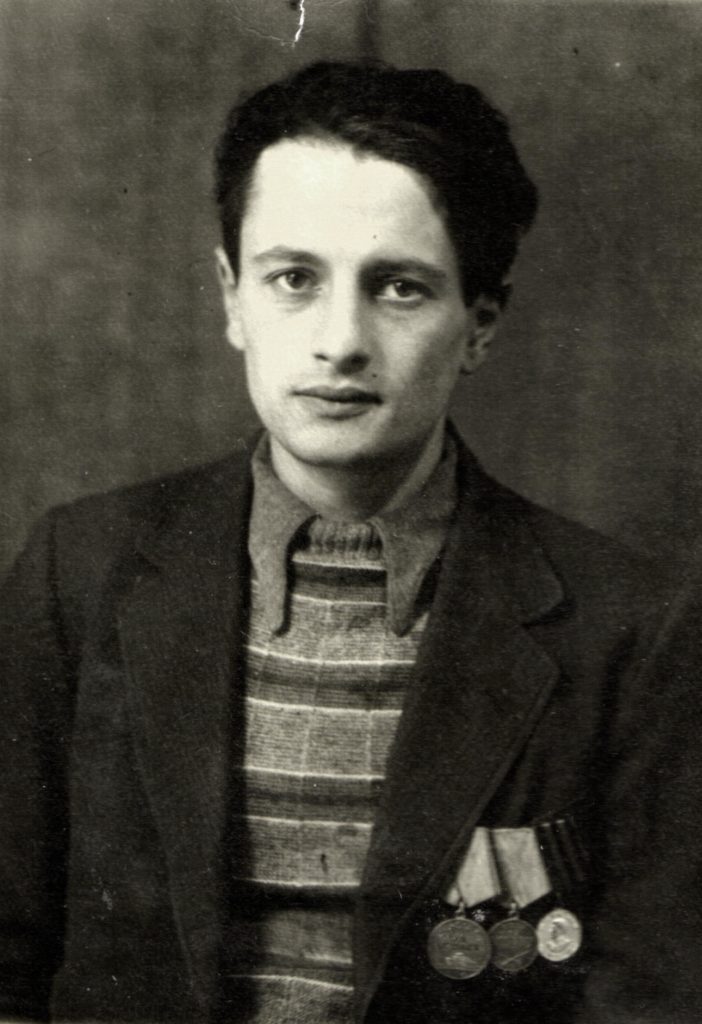 This is me.
This picture was taken when, after graduating from the institute, I was working at the mill. War veterans were photographed for the Victory Day, and I was given a copy of this picture.

My awards from left to right: Medal for Military Merits, Medal for Valor, and Medal for the Victory over Germany.

In 1947 I graduated from the correspondence department of the Moscow Textile Institute. I was already married and my wife was expecting a child. Having defended my diploma, I went to work at the Moscow cloth-mill as a foreman assistant.

Frankly speaking, my idea of an engineer’s job had been different. I wore dirty working clothes and dealt with adjustment and fixing of spinning machines. I worked like that for a year. I had no choice:
I had to work and provide for my family.

I worked as a foreman assistant for a year. Then they summoned me to the managerial department and told me they had no right to leave me in the worker’s position and offered me a post of the repairs-and-mechanics department head.

Actually, my new job was no different from the previous one: I continued fixing the equipment myself. I did not feel any anti-Semitism: workers treated me as their equal.

I was given a room in a communal apartment and we moved to live there. In 1952 my second Vladimir was born.

I worked at the mill for five years; then I was transferred to the weaving mill outside of Moscow. I was appointed head of the repairs-and-mechanics department and later I became the production manager.

We lived in Moscow and it was very hard to get to my work by a suburban train every day. I was given a room at a dormitory near the mill but my wife refused point-blank to leave Moscow.

The mill where I worked as head of the repairs-and-mechanics department wasn’t big. It produced low-quality blankets that were purchased for prisons and knitted kerchiefs made of goat down. Those kerchiefs caused me some problems. Goat down is expensive; workers constantly stole that yarn.

Naturally, there was some waste in the yarn production, but they used to steal the ready yarn. By the end of the shift, right near the mill there gathered people who wanted to buy the yarn from the workers.

The guards weren’t interested in catching the thieves because they paid the guards. That is why the guards searched the workers only conventionally.

I decided to stop the theft. I found out who was going to take the yarn out in the evening and demanded that the guard head searched those people.

The thieves were caught and fired. But their friends who still worked at the mill started being ugly with me; they wrote anonymous letters against me. Inspections came one after another to check my job.

Though, each inspection admitted that I worked well, all that was annoying and interfering. I quit working at the mill and got a job at the design department of the Heavy and Light Engineering Trust. They already knew me there, so I didn’t have any problems in finding a job.