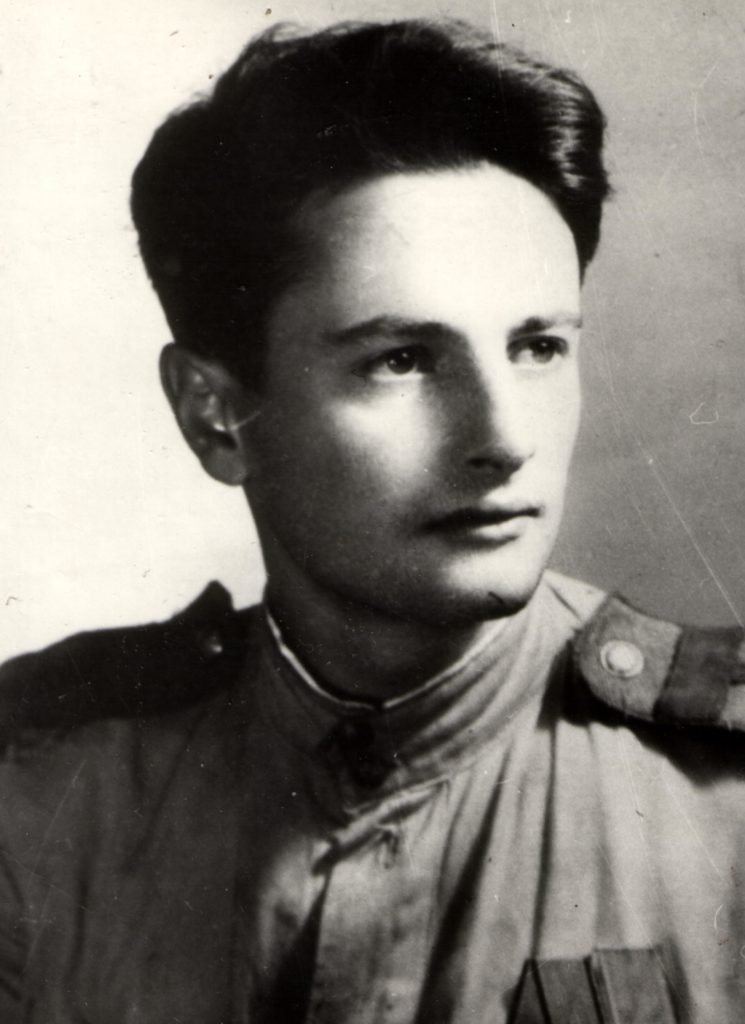 This is me, senior sergeant Lev Galper, a student of the training platoon of the 4th paratroopers’ battalion in the 15th airborne brigade.
The photo was taken in Moscow in 1942.

When the Great Patriotic War broke out I was in Moscow. I had just finished my fourth year at the Textile Institute; we were sent to Moscow for a practical training. The head of the military registration office told me that nearly all of my co-students had volunteered for the front.

At the recruiting office I was told that if I had no health problems I was to come to the assembly place the next day. There were 23 people from our institute and a friend of mine from the Construction Institute. We were entrained and brought to Mariupol.

I was enrolled in a special battalion of the 49th reserve rifle regiment. Guys with a secondary education or institute students were selected for that battalion, 1,200 people altogether. The Germans were approaching Mariupol.

Then we were sent eastward, we were entrained and brought to Stalingrad. There they embarked us on a small steamer that took us up the Volga river, to Saratov. There we were taken on the staff of the 15th airborne brigade, the 4th parachute battalion. We were divided into platoons and our training began.

In July 1942, we were formed in lines, ordered to hand in our paratrooper’s equipment and sent to Moscow. By order of the Supreme Commander-in-Chief, our 7th airborne corps was transformed into the 34th Guards Airborne Rifle Division.

Our corps commander Gubarevich was appointed division commander. Naturally, the re-forming process started because the corps structure is different from that of the division.

I was in the engineer/demolition combat platoon of the rifle battalion; together with my friends from Kharkov, I was sent to the 46th Guards separate communications company. This specialized company was to provide for the communication between the division commander and regiment commanders.

Since I was not a radio operator and I had nowhere to study I became a telephone operator holding the rank of senior sergeant. We were sent to reinforce the 28th Army of the Stalingrad Front where the Stalingrad Battle was already under way.