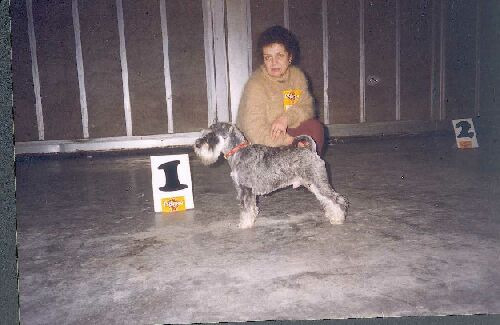 Galina Levina with her dog

This is a photo of me and my dog Mika, exhibited at the International Dog Show in Helsinki. The photo was taken in 1996. I always exhibited my dogs, and Mika won prizes. This was one of the occasions he won!

When our dog Duck turned 13, I realized that I needed ‘new blood,’ because I had nobody to ‘marry’ my doggy children and grandchildren. I ordered a dog in Finland, and finally I bought some dog from Lapland.

All my friends were thinking I behaved crazy buying an unknown dog from an unknown owner. That’s how my Mika appeared in this apartment, my first Schnauzer with tail and ears [in Russia they usually cut them off].

Soon, on 11th August 1994, my husband died from lung cancer. We argued a lot because of his health, ‘David, please, you need to put on the scarf, because you have troubles with your throat.’ And he said, ‘No, I’m not going to, I don’t want to.’ Besides all that he smoked a lot, and this played a role too. David is buried at the Jewish cemetery; of course, I visit his grave quite often.

In a month, on 16th September, Duck died. I exhibited Mika for the first time, we took part in some junior competition, and he won the ‘best in show’ category. This was a shock! What was going on! I almost cried, while I was walking the lap of honor and cried, because it was such a pity that David couldn’t see us. I couldn’t find the right way.

Mika performed very well: in the world championship he won the third position among 362 dogs participating. I consider it wonderful; it was a great result for my dog. So finally I remained living with Mika. And if sometime before I hadn’t learnt cutting the dogs [Galina means that some breeds of dogs have to have their ears and tails cut, and she does it and charges for it], I wouldn’t have a chance to survive. Now I cut the dogs, for my family, which includes me and my dog, that’s enough. Not long ago I took a little dog, because if something happened to the elder dog Mika, I would stay alone while I’m used to dogs.