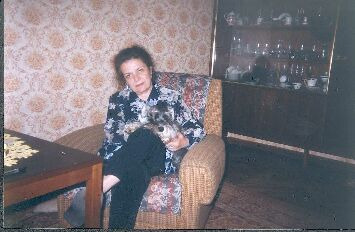 This is a photo of me. It was taken in the 2000s, some years ago, in my apartment (in the dinning-room, to be more exact).

Since my husband died I have been alone. My father’s sisters all died, his brother David also died about 15 years ago, and his daughter Anna, my cousin, moved to Moscow, because she got married to some Moscow guy. She has a daughter, my niece, who comes here twice a year. She is 26 and, obviously, we are great friends. Anna’s brother, the son of Uncle David, lives in Leningrad, we call each other from time to time, quite seldom.

Even though I’m a pure blooded Jew, perhaps, from those, who were searching for Israel together with Moses, and my husband was a Jew, I live in Russia, and unfortunately, I read nothing of Jewish literature except Sholem Aleichem. After all, I read Russian books, and I speak Russian. I look at Chagall paintings with pleasure, I like Levitan, too, but I like other artists just the same, especially the impressionists. Once I went to the synagogue on an excursion, and I’ve never been to the repaired Petersburg synagogue. Besides, we always wore ‘magen David’ on necklaces, we never hide that we are Jewish. However, my husband David always said, ‘Yes, we are a clever people, but if a Jew is a fool, that’s terrible. You would never find such fools among others.’

I don’t participate in the life of the local Jewish community; I don’t even know what’s going on inside it. Earlier I got postcards and newspapers from Hesed Abraham Charitable Center. They invited me to get medicines for half the price. I don’t get packages from them; Felix gets them and calls me to offer me something he doesn’t need. The staff from Hesed bring those packages straight to the House of Stage Veterans, and also every year he buys matzah in the synagogue. I like matzah, but as a matter of fact I eat everything edible.