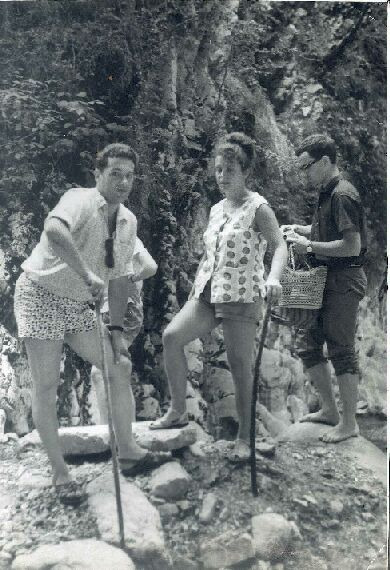 This is a photo of me, Galina Levina, and my husband, David Levin. It was taken in 1968 in the south of Russia, not far from Tuapse, at the Mamedovo cave, while we were on vacations.

Once I was at home, not looking particularly good, I was wearing a home dress and didn’t wear any make-up. At the same time my cousin, who was living in our apartment, too, had a birthday party. I, due to some reason, didn’t want to participate in it and said I wouldn’t go, I don’t remember exactly what happened. Anyway I was sitting alone and acted like I was very angry.

My cousin invited a young man, who was dating her at the time, and he took his friends with him. So they had more guests than they could host, and they were looking for an additional table.

My cousin said, ‘We can take Galina’s table, but she is angry, who is going to ask?’ So this boy, a friend answered, ‘I don’t care. I never knew her and won’t know, let me go, which room is it?’

Soon he called and asked something about the table. I said, ‘This is the table. Here you go!’ He left, but then he came back and said he was bored with them. This guy turned out to be my future husband.

My husband, David Levin – I always called him simply David – was really a handsome man and a very easy-going person. Then you couldn’t marry quickly, we had to wait for two months, but he arranged it. He said he was going to have the so-called Komsomol wedding, that’s why we had to pronounce slogans for the Soviet power and so on. I was already 30, and he was five years younger, he was born in 1939.

David’s father was killed during the Great Patriotic War somewhere not far from Staraya Russa, I know he was very young; he was only 25 or 26. David’s family moved from Staraya Russa to Leningrad, here he finished college. He inherited some talents from his parents: he had a good ear for music and dancing skills.

Seeing me for the first time in her entire life, his mother, looking in her sons’ eyes, said the following: ‘You always dated such beautiful women. What did you find in this one?’ David asked me not to pay attention to her.

During our Komsomol wedding, which looked like a real madhouse, she said to my aunt: ‘You have such a nice girl. What did she find in my foolish boy?’ My aunt ran to me with eyes wide open and asked: ‘If his own mother says he is a fool, maybe you shouldn’t marry him…’ I answered her just the same: ‘Don’t pay attention.’