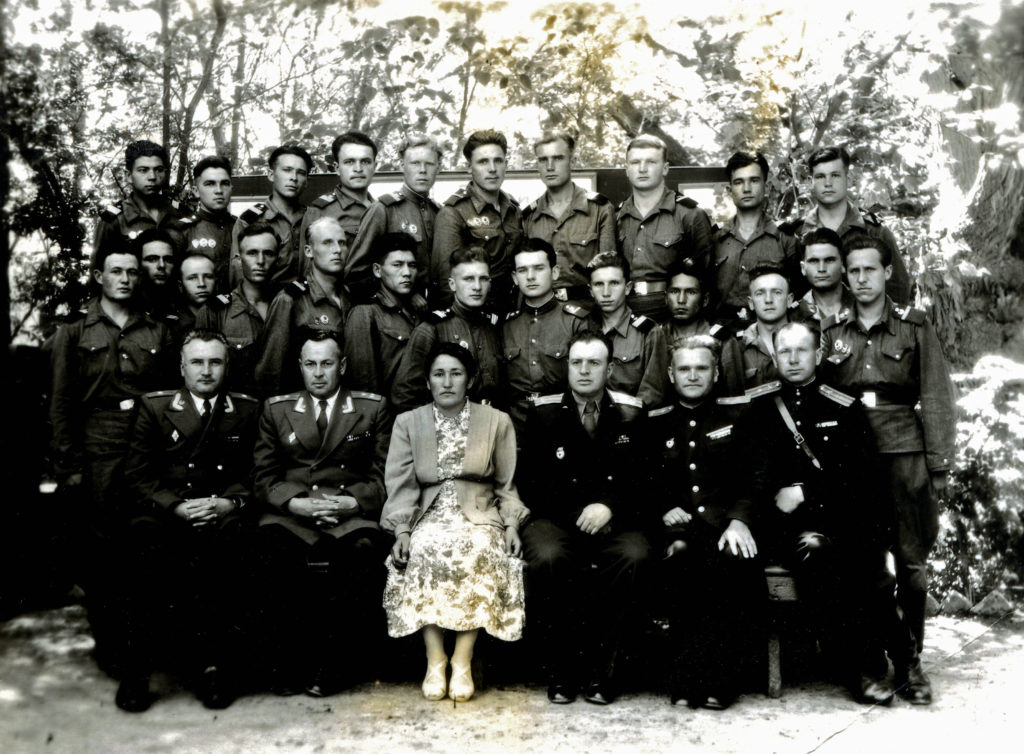 Friedrich Falevich with his schoolmates

These are graduates of the evening party school at the garrison house of officers.

I am the 3rd on the left in the 3rd row, but I don’t remember the others. We studied together for a few months and then we went to different place and never saw each other again.

Besides, it was so many years ago…. This photo was taken in Termez in 1956.

After finishing school I entered the Finance and Economics College in Minsk. After my first year there I was regimented to the army. I was entitled to continue my studies after my mandatory service in the army.

I served in Uzbekistan, at the Soviet-Afghani border in Termez settlement. I did very well in the army. Everything was fine. I was assistant commander of a platoon.

There were 30 of us in the platoon. I went in for sports in the army: sprint, football and handball. My supervisors favored me. There were no complaints or demonstrations of anti-Semitism during my service.

I joined the Party in 1955, and went to study at the evening party school. I was elected a member of the regiment party committee. I have nothing to complain about.

Everything was just right. I would wish everybody to have such smooth army service as I did. The only burden was the climate. Termez was known as the hottest spot in the Soviet Union.

The splitting summer heat was hard to bear. This was the only saddening thing at the time. In 1956 I was granted a month’s leave and went to Slutsk. I got married during this leave, and I was a married man when I returned to my unit.

I’ve known Dora Liefshiz, my wife, since school. We were in the same class and we were friends. Dora was a Jew and also came from Slutsk.

When I was in the army, Dora and I corresponded and sent pictures to one another. When I came on leave, we registered our marriage at the registry office and arranged a modest dinner for our close ones.

One month leave flew by and I went back to my military unit.