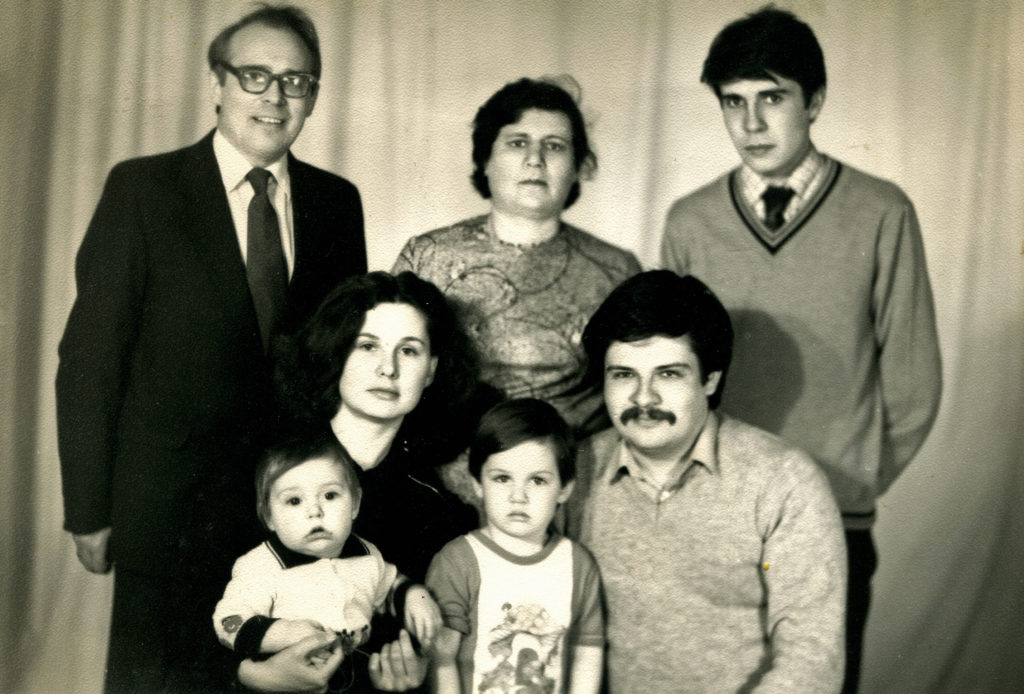 Friedrich Falevich and his family

This is my family. From left to right, standing: I, my wife Dora, an my younger son Grigoriy. Sitting:

Upon graduation my son got a job assignment to Latvia. I can’t remember which town it was. Boris worked as a mechanic and then as director of a weaving mill. Before his departure to Latvia he married a girl from Slutsk.

They were school-friends. My daughter-in-law, Yelena, is Russian, but what does it matter? It is important that they love each other and get along well. They have two sons.

The older, Alexey, was born in 1983, and Oleg was born in 1985. They were born in Latvia. My grandchildren are true Latvian citizens. They studied in a Latvian school and speak the Latvian language. They are students now.

My son is commercial director of a company, and his wife works in a trade company. She monitors the trade sites of her company. This is all I know about her job.

Life in Latvia became more difficult after the breakup of the USSR, but my son and his family have no complaints about life. They learned the Latvian language and passed their language exams.

They’ve obtained the Latvian residence permit. They’ve lived in Latvia for 36 years. My son and his family are happy with their life in Latvia and have no intention to leave it.

They visit us once or twice a year, and I can see that they are doing well. God grant them everything good in the future: when the children are happy, their parents are always happy about it.

He was a military financier and also served in the Soviet army regiment in Germany. After returning from Germany he served in Belarus. Now my son is senior lecturer at the Military Faculty of the Department of Finance of the Belarusian National Technical University.

He is a lieutenant colonel. Grigoriy is married. His wife Lilia is Russian. They have two sons. Their older son, Boris, was born in 1986.

The younger, Alexandr, was born in 1988. They are students at university. So our surname of Falevich shall not vanish. My four grandchildren have inherited it.

Grigoriy cannot visit us often. He has his job and his life, but he calls us almost every day. He cares about us and supports us as much as he can.

Even a kind word is a good support for parents. I’m happy that my sons have their own way in life and that my wife and I have our part in it. Our sons also get along well with one another.