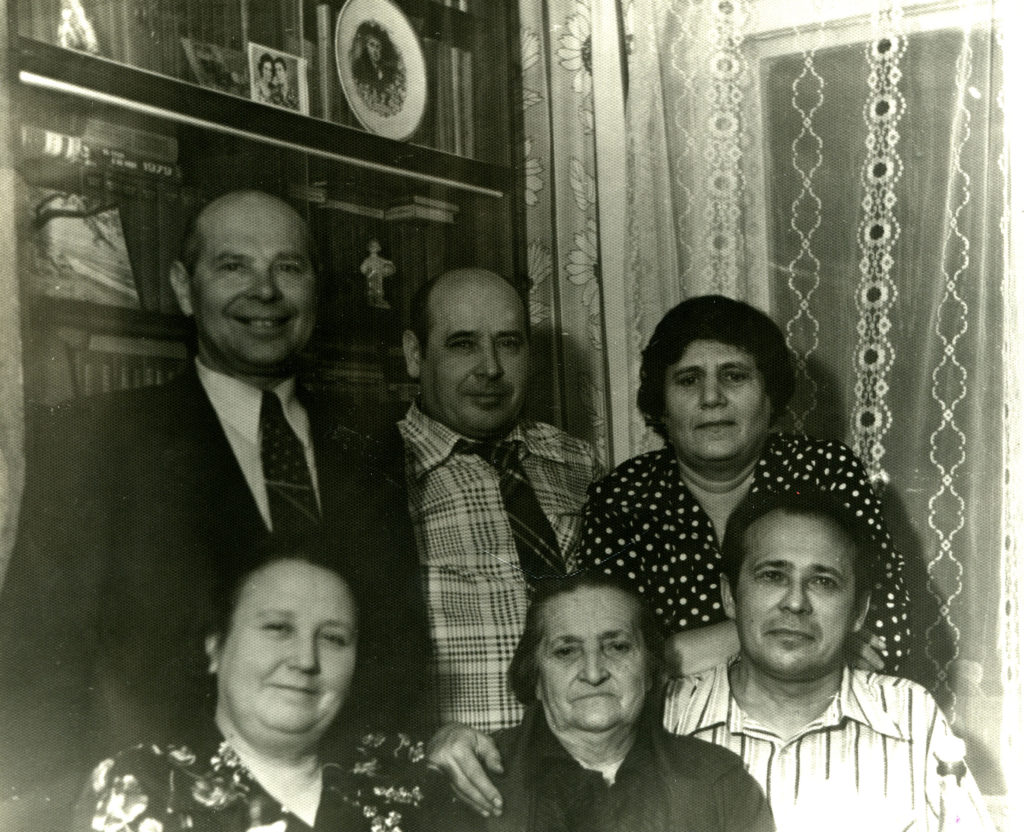 Friedrich Falevich and his family

This is our family photo. From left to right, sitting: my brother Boris’ wife Zina Falevich, my Mama and I.

Standing: my brothers Igor and Boris, my wife Dora. This photo was taken in Slutsk, at Mama’s home, when we visited her, in 1980.

My wife Dora and I lived in a small wooden house that belonged to Dora’s parents.

The living area was about 20 square meters, and it was shared by six tenants. We enrolled in the queue for apartments at the executive committee, but it was such at the time that the priority was given to those, who had no place to live whatsoever.

Our house was small, damp and tumbledown. There was mold everywhere caused by dampness. There was even mould on the clothes in the wardrobe.

There was no sufficient space to sleep or breathe. In 1963 an inspection commission from the executive committee visited us to inspect our living conditions.

I received the key to our new apartment, and when my wife and I came there, we started crying from joy.

After we moved in there, we were overfilled with joy for a long time. I often went to see Mama. I supported her as much as I could.

My oldest brother, Igor, didn’t stay long in Slutsk after his demobilization. He was proposed to marry a Jewish girl from Osipovichi, a Belarusian town.

Igor married her and moved to Osipovichi. He had a son. His name was Yefim. Igor had no education and was a construction worker. They left Osipovichi for Slutsk, and some time later they moved to Minsk.

From Minsk they moved to Israel and settled down in Nathania.

My second brother, Boris, lived in Slutsk. When I was in the army, he married Zina, a Belarusian girl that came from Slutsk. My brother had two children.

Boris has three grandchildren. Iosif is married to Galina, a Russian woman.

They have two daughters. The older one is Tatiana, and the younger one is Anna.

Maria married a Jewish guy. Her marital name is Kulesh. Maria has a daughter. Recently Maria and her family moved to Israel. I hope they will manage well.

My brother and his wife live in Slutsk. My brother is very ill. He used to be a strong and healthy man, but life has overburdened him so much that he is fearful to look at.

There is nothing to do about it. This is what life is like… There is only he and I of our family left in Slutsk. Mama died in 1986.