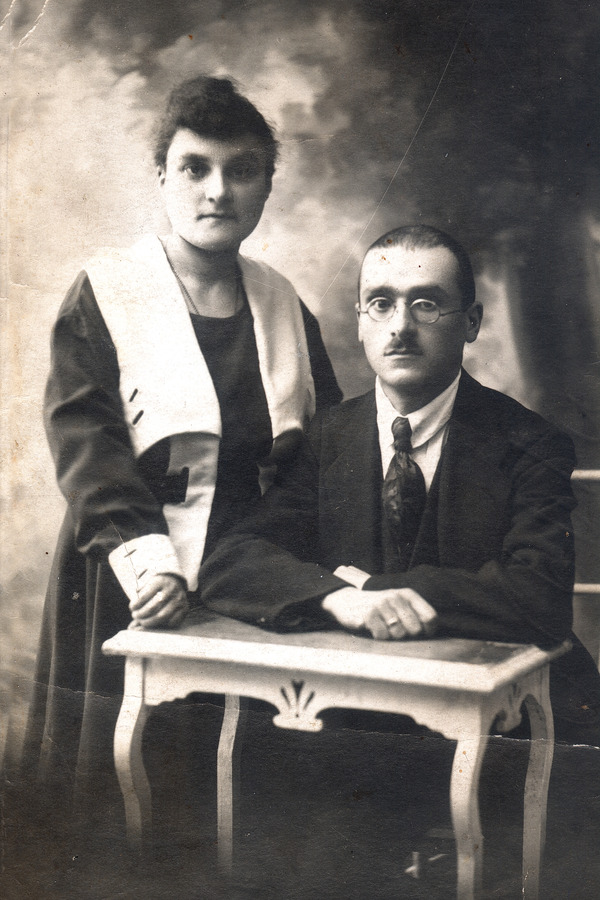 Here you can see my father Osher Levin and my mother Ginde Levina. The photograph was taken in Minsk in 1920.

My Daddy, Levin Osher Girshevich was born in Minsk in 1991. His coworkers called him Oscar Grigoryevich. Daddy worked as a teacher of Jewish and Russian languages and later (when I was a pupil of the 8th or 9th form) he started working as a bookkeeper.

His health was always weak: he was visually impaired and always wore glasses. Daddy was lost in Minsk ghetto in 1941.

My Mum was born in Minsk in 1895 and was lost in Minsk ghetto on November 20, 1941. Her maiden name was Hautovskaya. Her Jewish name was Ginde Elyevna, but everybody called her Eugenia Ilyinichna.

Mum finished a high school in Minsk, she worked in Minsk Executive Committee of the City Soviet of People’s Deputies. Probably Daddy could not support our family alone, therefore Mum had to work.

Mum and Daddy spoke Yiddish to each other, and we (children) understood them, but they did not teach us to write and read Yiddish.

I know nothing about the way my parents got acquainted, about their wedding, but I guess that everything was arranged according to Tradition, because my grandfather was strict religious observer.

In our family there were 3 children: elder brother Hirsh was named in honor of my paternal grandfather. Hirsh was born in 1920.

Daddy had a lot of books: I remember books by Chernyshevsky and Gertzen. Mum read less, because she had to work: there were no assistants, she had to do the house, cook meals. She used to come home late in the evening, but Daddy helped her much.

I remember the following: one day Mum came home and lay down to have a rest, and Daddy came up to her and kissed her in our presence (I guess that action was some sort of educative value: he wanted to show the children an example of proper relations between family members).

Daddy read much, knew much, and played first fiddle in our family. We did not go to the regional library: every school had its own school library, where we borrowed books for reading.

Our family did not observe Jewish traditions, but for Pesach grandfather used to come to us, bring matzah and some very tasty wine, which he asked all of us to taste.

My parents were not Party members. I know nothing about their political views, because that topic was taboo for us.

Daddy probably had a white chit [a person exempted from compulsory military service because of poor health]. He was visually impaired since childhood and wore glasses all the time.

My parents did not go to the synagogue: they had to work much, they had no time for talking, it was necessary to take care of 3 children. I remember that once our parents went to the theater, and we together with my brother remained at home.

There were no locks at that time, I barred the door and we fell asleep. We did not hear our parents returned from the theatre, did not hear them knocking at the door.

Daddy had to bring a ladder, climb upstairs, and get in through the small opening window pane of the room on the 2nd floor.

I do not remember my parents leaving for somewhere to have a rest. As for me, I spent summer holidays in pioneer camps, and my younger brother went to dacha with children from his kindergarten. Mum worked all days long, therefore it was me who often visited my brother in his kindergarten.

Uncle Tolya’s wife was aunt Rachel (she finished the high school together with my Mum). All of them lived in Minsk. During the war, in ghetto all 3 brothers and their families lived in one 14-square-meter room.