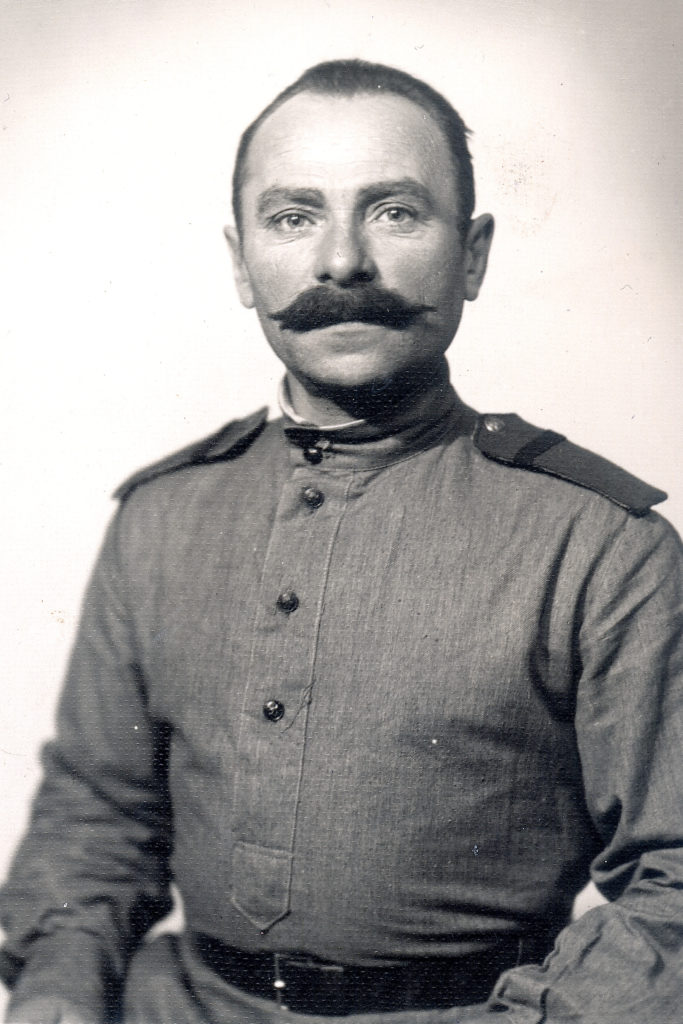 This photograph was taken in Hungary in 1945. It shows my mother’s brother David Hautovsky when he served in the Soviet Army.

My grandfather Hautovsky and his wife had got 10 children: 7 daughters and 3 sons. They all lived in Minsk. My mother’s brother, uncle David (born in 1896) had a family, and uncles Misha and Shayle were not married.

On the 2nd day of war on June 24 Germans severely bombed Minsk, and troops entered the city. Our neighbor Shura Bogdanovich (he had a Jewish wife and 2 little children) came by a large car, took his family, his wife’s parents, our family and 2 families more.

Minsk was burning, it was full of smoke, and Shura took us away from Minsk (later it turned out that we moved towards German troops). We ran away from fire, not from Germans.

We arrived in a small town near Minsk; there we spent 10 days. Soon that town turned out into a battlefield, and we went back to Minsk on foot.

When we returned to Minsk, we found out that our house had been bombed-out. Next to our house there was a military hospital. They spread out a special cloth with a red cross: they expected Germans to be civilized people and not to bomb a hospital. But they used that cross as a target and destroyed the hospital by bombing.

We went to grandfather. Grandfather, aunt Sonya and two little children could not leave Minsk during the fire, but they survived the bombardment: all houses around were burned down except theirs.

When I asked aunt Sonya how they managed to survive, she answered ‘Lena, you know that I believe in God; I was sure that God would help us.’

They curtained windows with wet bed sheets and saved their lives. Moissey, aunt Sonya’s husband was at the Leningrad front, they corresponded with each other, but at the end of the war aunt Sonya stopped receiving letters from him: probably he was killed in battle.

Grandfather lodged us in the apartment of uncle David, which also escaped bombardment (uncle David left the keys for grandfather when his family was going to be evacuated).

The ghetto limit went along the street, where uncle David’s apartment was situated. Unfortunately our side of the street was ascribed to Russian area, and the opposite one was included in ghetto territory.

From the letters I learned that aunt Polya, wife of uncle David was evacuated to Bashkiria. I also understood that they wanted to come back home. I made invitations for them.

My aunt and her children arrived in December 1944 or in January 1945. I told my aunt everything, and we managed to lodge her and her children in her former apartment together with new tenants.