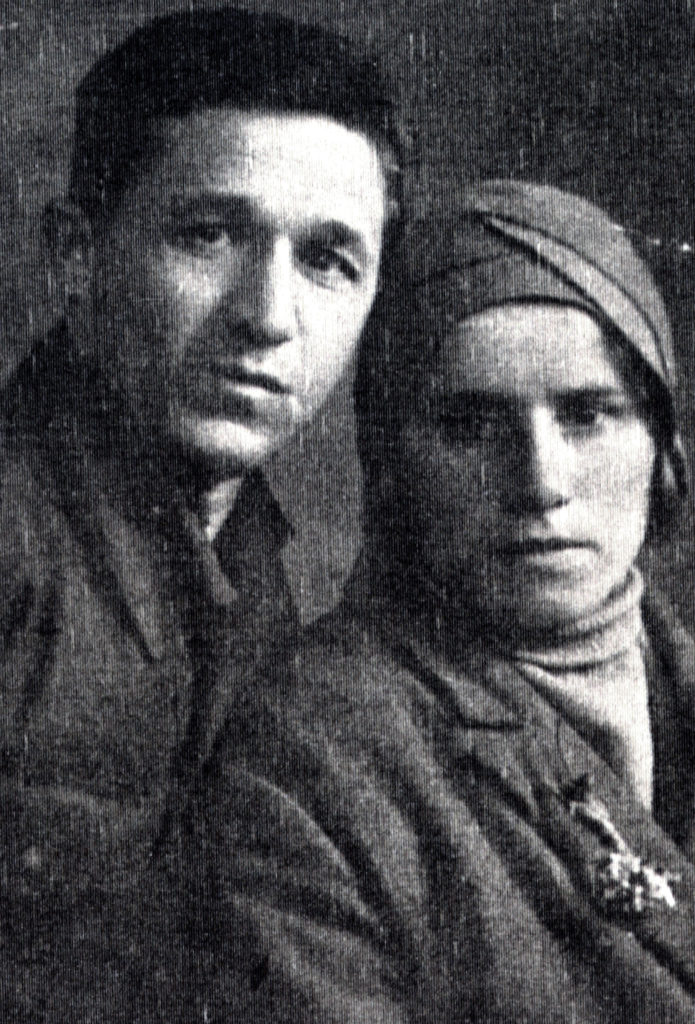 This is a picture of my older sister Lisa Muravina [nee Pisarenko] with her former school and future husband Aron Muravin. The photo is signed, ?To my dear brother from your sister. Lisa. 17.VII. 46?. In May 1941 Mama sent me and my older sister Lisa to Aunt Musia in Moldavia. Her husband and daughter lived in the town of Bershad. This was a Jewish town. At least 80% of the population was Jewish. I was three and a half years old, Lisa was 16. On 22nd June 1941 the war began. I didn’t understand what it meant. Aunt Rosa’s husband was summoned to the army. Soon Bershad was occupied by Germans. They sent all Jews of the town to a camp. Adults went on foot and children on carts. I had never seen horses before and was impressed. The camp was a part of the town fenced with barbed wire. It was guarded by Romanian gendarmes. There was one gate and the guards standing there were armed with automatic guns. Police dogs were running along the fence. My sister, me, Aunt Rosa and her daughter shared a room with a few other families. We slept on the floor cuddling each other. Lisa worked at the butter creamery. A Romanian guard fell in love with her and allowed her to take some pressed wastes with her. This was our food. In summer we collected the seeds of some plant, I don’t know which one. We also ate goose-foot and hawthorn. It caused a headache, but it didn’t stop us from eating it. Every now and then there were raids in the streets, and the captives were either shot or sent to death camps. The Romanian guard told Lisa beforehand on what street there was going to be another raid. He saved our lives. Once he gave me a toffee. My mouth still waters when I recall how good it tasted. In 1945 the Soviet army liberated us [from the camp]. After the war Lisa was an apprentice at the weaving factory. After a year she finished a course in accounting and became an accountant at the same factory. She married Aron. They loved each other, and my parents gave their consent to the marriage. Lisa and her husband had two daughters. Regretfully the time in the camp during the war affected Lisa’s health and she died young, in 1966.